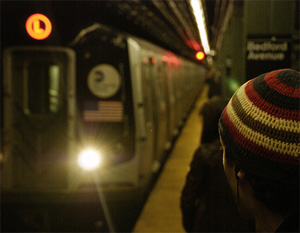 Two flat-screen monitors are being installed on the L train platform at the Myrtle-Wyckoff station in Brooklyn that will show the locations of trains in real time. Icons on the screens will indicate which direction the train is headed and how close is it to the station, with a long view of the entire L line, as well as a close-up view of nearby stations. According to NY1, riders will also see trains that are being held and trains that aren't picking up passengers.

The information will be updated every 15 seconds using the L line’s computerized operating system, which is the most technologically advanced in the subway system. If the pilot program works, officials say they'll be installed at other stations on the L and eventually city-wide. (The consoles cost about $15,000 per station to install.) Wilson Milian, director of technology projects at the transit agency, tells the Times, "There’s no end to the possibilities." Milian envisions a crazy utopian future where this train information could be displayed on the Internet! And, naturally, Milian wants the screens to display ads.

The real-time screens could conceivably be a big improvement on the electronic signs installed on L train platforms last year, which are supposed to tell you how many minutes until the next train arrives. It seems those signs use a computer program to estimate train movement based on a set schedule, not the real-time information from the L that the new Myrtle-Wyckoff consoles will utilize.