In the wake of the violence committed by white supremacists in Charlottesville, city officials have swiftly joined the chorus of voices nationwide calling for the removal of public structures commemorating the Confederacy. In New York, those works include monuments to Stonewall Jackson and Robert E. Lee at the Bronx Community College campus (soon to be removed), a church plaque commemorating Lee at St John's Episcopal Church (removed Wednesday), and a street in Fort Hamilton bearing Lee's name (still there, for now).

Less discussed, but equally hard to explain in our solidly pro-Union city, is the presence of dozens of decorated tiles resembling the Confederate battle flag at the 40th Street entrance to the Times Square subway station. As the Post first reported in 2015, the tile mosaics were likely put up in 1917 by the station's architect, Squire J. Vickers, in honor of former New York Times publisher Adolph S. Ochs—"a Southerner with 'strong ties to the Confederacy," according to Civil War historian Dr. David Jackowe.

Fact-checking the Post, the Times' conclusion was ambivalent, but the paper did note that Ochs' mother was a member of the Daughters of the Confederacy, and that their former publisher was "proud of his ties to the South."

The MTA previously—and again today—told Gothamist the tiles are the symbol of Times Square "representing the Crossroads of the World," to which we say, come on now. 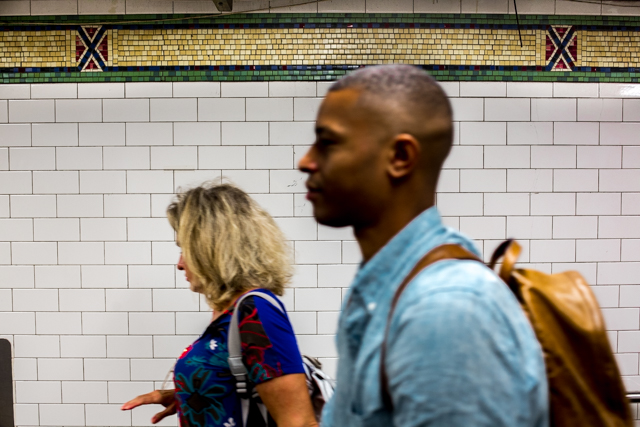 "It does resemble a Confederate flag, a lot," Reggie Fullard, a Harlem resident who uses the station daily, told Gothamist on Thursday. "I think they should take them down. It's real suspect."

"If I was in charge of the MTA I would probably change it," echoed Ari Satlin, a musician from Spanish Harlem. "Especially in a multicultural city like this, I'd want more of a universal symbol. Not something that resembles the Confederacy."

The MTA will soon heed that advice, though they maintain that the tiles are a totally different thing. In response to our inquiries, MTA spokesperson Kevin Ortiz told us Thursday: "These are not confederate flags, it is a design based on geometric forms that represent the 'Crossroads of the World' and to avoid absolutely any confusion we will modify them to make that absolutely crystal clear."

He did not respond to a follow-up question about when the changes will be made, and what sort of modifications are planned.

City Hall, meanwhile, did not comment directly on the Times Square tiles, but Deputy Press Secretary Ben Sarle did tell Gothamist that the mayor's office was "putting together a panel of relevant experts and community leaders," as part of the "beginning framework of what will ideally be a long-term approach to the evaluation of public structures and controversial pieces of public art."

As historian Manisha Sinha told us earlier today, "better late than never." Once New York is cleared of explicitly racist monuments, maybe we can do something about the fact that the overwhelming majority of the city's statues are still white dudes.

#confederate flag
#MTA
#subway tiles
#Times Square
#original
Do you know the scoop? Comment below or Send us a Tip