Subway Terminology: Your New Dictionary To Decipher Why Your Train Is Delayed

Over the last year, the MTA has made a sincere effort to provide more transparent info about the frequent subway delays, whether by responding to as many people as humanely possible on Twitter or getting progressively more explicit about reasons for delays. They're taking things one step further by retiring some of their more anarchistic phrases (like "Service Changes") and instead introducing seven new categories of service status conveyed on a line-by-line basis starting tonight. Get ready for a brave new world filled with TRAINS REROUTED, SLOW SPEEDS and the dreaded PART SUSPENDED.

"New Yorkers live in the ‘right now’ and deserve helpful information in the moment so they can make the right choices about their travel," NYC Transit President Andy Byford said in a statement. "These changes provide customers targeted, at-a-glance information to help them quickly understand exactly what’s happening on their line. It’s always our goal to improve the quality of our real-time information and this is another step forward in that ongoing process."

The new language will describe the specific changes being made to train service on an individual line basis. Here are the seven new categories you'll be seeing:

Part Suspended: Situations where a major disruption causes multiple stations to lose service in either direction. This could apply when a line is split in half or service ends before a train’s normal terminal.

Trains Rerouted: Situations when a train is sent over a different route than it normally travels for that time of day. For example, if the A goes over the F, not the A going over the C.

Local to Express: Situations when a train that normally runs local uses the express track on its normal route.

Express to Local: Situations when a train that normally runs express uses the local tracks on its normal route.

Stations Skipped: Situations where trains continuously skip a station in one direction or come through a station without stopping. For example this could be used for police activity or medical assistance but not typical skips/holds to help keep the train on schedule.

Slow Speeds: Situations where trains move at slower than normal speeds but make all their normal stops. This would be used in situations where workers are on the tracks or we conduct track inspections.

And here's what it'll look like on the app: 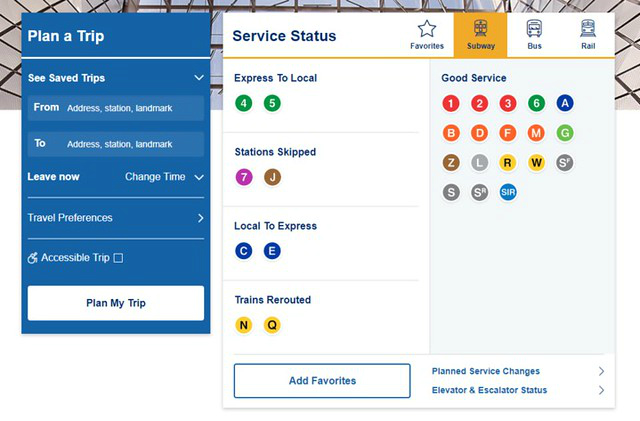 They also tweeted out a few graphics to better visualize it:

"Local to Express" is for times when trains that run on the local need to run on the express track. This happens often to help us avoid service backing up behind trains that can't move so we think it will help anticipate travel times. pic.twitter.com/BXcrv4zPwQ

There is also a new status called "Express to Local" for when express trains use the local tracks. Customers will not miss their stop in these situations but travel may take longer. pic.twitter.com/Ydp4jIjNx8

In the hopes of more transparency, here are a few more category suggestions for the MTA free of charge:

Weird Sound Delay: When an unusual noise spooks a conductor.

Literal Clog Delay: We all know that when you gotta go, you gotta go—but sometimes the toilets don't know that.

Loose Goose On The Lam: Whenever a pet goose jumps out of its safety harness and takes off. (This could also be applied to any runaway subway animals as well.)

Mondays Alert: When the subway has a case of the Mondays...even if it's Friday.

#MTA
#subway
#subway lingo
#subway stylebook
#train
#we the commuters
Do you know the scoop? Comment below or Send us a Tip