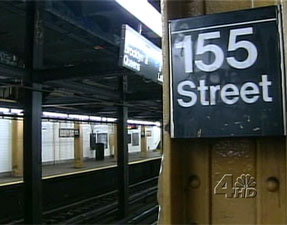 A young man died when he fell from the roof of a C train last night. The 21-year-old had been riding on top of the southbound train car, "subway surfing" when he fell just north of the West 155th Street stop.

A track worker told WNBC 4 that the victim "was holding on and he came to a wall that was long and it whacked him." Another witness said that the station was flooded with rescue workers, "We didn't know exactly what happened, but they went down in the subway station and they blocked it off and that was that. They didn't let anyone else go in or out until I guess it all was cleared out."

The C was suspended for a few hours. The police believe the victim, who was homeless, was on his way to a "safe haven program" with his friends.

In 2003, there were three incidents of subway surfing and at least one more in 2005, prompting the MTA to start a "Don't Surf the Train - Surf the Web" campaign. More recently, a train was stopped last month to get a subway surfer off the roof of a subway car. And back in 2000, the Village Voice spoke to some subway surfers: "The 400-ton machine starts up again, building toward a speed of 30 miles per hour, and the young men move to their feet, defying the laws of physics and common sense."

#friends
#homeless
#laws
#MTA
#police
#subway
#The C
#traffic
#train
#village voice
#wnbc
Do you know the scoop? Comment below or Send us a Tip