Subway commuters entering Grand Central Terminal and the Atlantic Avenue - Pacific Street Station are getting a peek at a new flatscreen display showing real time service status info for the entire system. Called Station Advisory Information Display, or SAID, the split-screen display resembles the service status update page on the MTA website, and is intended to give straphangers vital information about problems in the system before they pass through the turnstiles. At least, that's what the MTA SAID.

Subway lines and train service status information are on one side on the screen, and when “Good Service” status is indicated, nothing is displayed on the right side of the screen. But if a status of “Service Change,” “Delay”, or “Planned Work” is shown, as indicated by a red circle next to the operating lines, an explanation is provided on the other side of the screen. 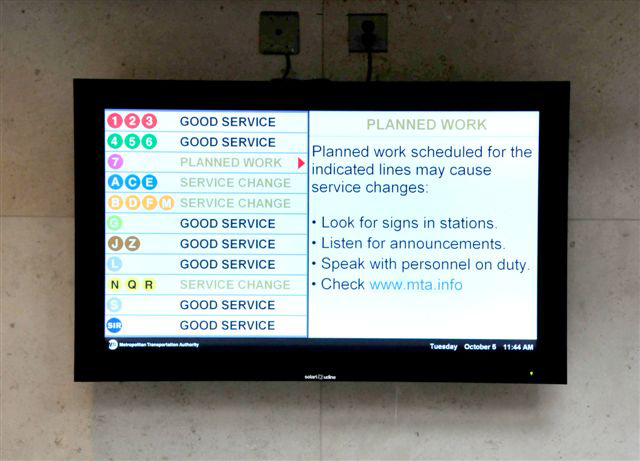 In Brooklyn, the new SAID Sign is currently on display at the 4th Avenue entrance to the Atlantic Avenue - Pacific Street Station. At Grand Central it's adjacent to the main booth. MTA chief Jay Walder tells the Post, "It could be a game-changing event. I'm envisioning a screen that will be out there and can lay all of this information out. We can put the information in the coffee shop on the corner and other places located near the bus stop." Walder, who cautions that the MTA is using existing technology for SAID and the only cost comes with purchasing the screens, also says the MTA is considering selling ads on them. Today's Delay is brought to you by Frito-Lay... eh?