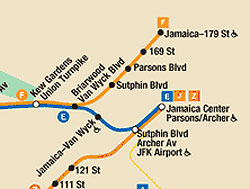 On Monday afternoon, a 51-year-old woman was stabbed multiple times on the head and shoulder with an 8-inch kitchen knife at the 169th Street F train platform in Jamaica, Queens. Paula Jean Baptiste's attacker, Matthew Cordacho, was trying to steal her purse but fled the scene after Baptiste put up a fight. However, he was followed by a witness who called 911 and ended up being arrested a few blocks away.

Baptiste spoke to reporters after being released from the hospital. She said that Cordacho told her she dropped something from her bag, and when she turned to look and said, "No, I dropped nothing," he attacked her. Baptiste thanked the people who helped her but said, "If there were police, then it would prevent [crime] because he would be scared."

Cordacho was charged with a number of crimes including attempted murder and attempted robbery. And Newsday explains this was his third arrest in three months: In August, he hit a stranger on the back of her head and, a few weeks later, he violated an order of protection that the same woman had against him (they were both at the Queens Public Library, Cordaco had a 4-inch kitchen knife in the his back pocket).