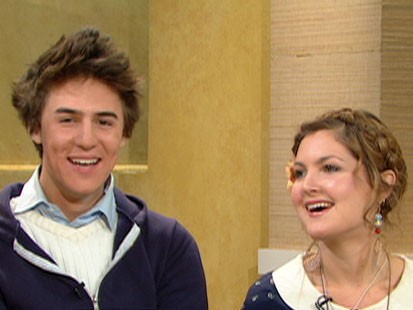 The story had all the makings of a Hollywood romantic comedy from the get-go, so it's not surprising that Patrick Moberg is shopping around the rights to his real-life subway sweetheart story. It is, however, just a little disheartening that everything really is a commodity.

Despite what he declared on his site after finding "the girl of his dreams" (telling us voyeurs we'll have to write our own ending to their story as they figured things out in private), he is leaving the spotlight on himself and his lady Camille for as long as it'll shine. Portfolio reports that:

Moberg says he's had "a lot of offers" for the rights to his tale, which has already netted him an appearance on Good Morning America and interviews with In Touch and other magazines. "There's things on the table," he says. "I'm still sort of figuring it out."

What kind of "things" are we talking about -- film, TV, a quickie paperback novelization? "Yep." But the first order of business, he adds, is to hire an agent; he's already taken several meetings. "We're still thinking everything over, trying to organize," he adds.

Nothing says romance like selling the rights to your own personal love story. We're beginning to think this fictional outcome written by the Land Grant College Review is going to become reality. We can totally hear Zac Efron delivering the tragic last line in their Lifetime made-for-television movie: "The whole place reeks of Camille’s flowers, her goddamn flowers."