One of the first rules of using your iPod in the subway is to ditch the white headphones. Apple's tell-tale earbuds can have the negative effect of drawing attention to the fact that you are carrying a ~$400 device on you (we've known this since 2005, when iPod robberies were all the rage). Probably not something that needs to be advertised. When Gothamist first purchased our iPhone on launch day this fact weighed heavily on our minds.

In order to keep various i-products, it's important to find a suitable replacement for the standard, included white earbud headset. Unfortunately, since the iPhone, is still a relatively new product with a unique headphone jack, the options are slim.

In the end, the V-Moda Vibe Duo won out overall. Read on, after the jump, to see how all of the models tested compared. But first, check out this iPod Touch spoof commercial by someone who was beaten up on the subway for his!

my stolen ipod touch commercial from matthew k on Vimeo

There are a number of issues with trying to replace the iPhone earbuds, and they have been well documented. First, the jack is recessed. This means that without an adapter, most headphones wont work. Secondly, even if you did find a headphone to fit, it most likely is missing a few core functions of the iPhone earbuds. Inline on the right headphone wire is a microphone and a clicker. The clicker helps you answer/hang up for calls, play/pause/track skip for music. Any suitable replacement would have to include these same functions.

So as a savvy New Yorker, I set out to find an alternative to the iPhone cables. My requirements were these: 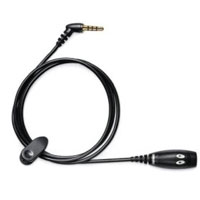 Shure Music Phone Adapter: As a previous owner of the Shure e2c, I was excited to stay with Shure because of the quality that I had come to enjoy. It matched on the three of the four functions I needed. The one it fails on is cable length.

The Music Phone adapter was just that - an adapter. Instead of a full system like Apples buds, the MPA is simply a microphone (with remote functions) that fits into the iPhone recessed jack. It is then up to you to provide headphones to plug into the top of the device. This creates a problem as the MPA cable itself is nearly 3ft in length and any headphones you add to that instantly creates a cable management nightmare. Shure offers a headset with a 1 foot long cable that wouldn't be so bad, if the cheapest price wasn't $120 with the SE110s. We were able to find Sony earbud headphones with a 1.5ft cable for only $29 with the MDR-EX71. This brought our total length over 4.5 feet long, where the original Apple unit was only 3.5 feet. But more importantly the Shure device meant the microphone was nearly 2ft away - compared to the 6in on Apples. This just wouldn't do. 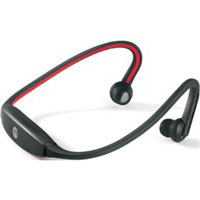 Motorola ROKR S9: While disappointed with the Shures, and not necessarily looking for another pair at the time, I came across the ROKRS9. What sets these apart from the other headphones I reviewed is that this unit is bluetooth. It pairs with the iPhone, and you can answer and receive calls with the buttons on the side; the microphone too is right near your mouth. Best of all there is no cable management to deal with. The sound is good, not great - but good for a mobile device as wireless units tend to have less sound power.

Unfortunately, this perfect pairing had a couple of glaring flaws - one minor, one major. First, unlike the others, the telephone conversations audio only played in one ear. This is odd because both ears are plugged by the headset, and the other headsets are able to do it - so this should two. Second, the most major issue isn't Motorola's fault at all, but Apple's. The iPhone lacks support for A2DP - the Bluetooth Stereo Profile. Without it, you have to resort to a hack in order to play music through it and, even then, it too is only on one speaker. Until Apple supports A2DP (which they just finally did in the desktop world with Leopard) don't even waste your time with this one, but remember about it when they finally do (it probably would have won me over otherwise.) 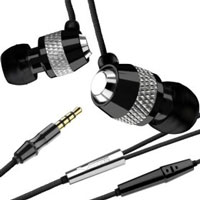 V-Moda Vibe Duo: We were aware of V-Moda Vibe Duo when the iPhone first came out. At the time the Vibe Duo line was one of the few headphones that fit into the iPhone jack without any adapter. It also had a built in microphone, but it lacked a clicker functionality - a deal breaker in my search for the perfect replacement.

All that changed recently, as V-Moda released an update to the Duo line that added the clicker support to the iPhone. We grabbed one to try it out. Non white cabling - check. Microphone & Clicker built in - check. In the ear - check. Short cabling - check. The cables are slightly the longer than Apple's, but the microphone hits at the same spot. It uses "noise-isolating" technology that blocks out the majority of the platform noise. It takes a little getting used to, as it sort of feels like you have water in your ears (but that's typical in my experience with any rubber in the ear headphones).

The only annoyance I have with these headphones is the cable itself. Instead of the normal plastic sleeve, the V-Moda's are wrapped in a textured fabric, sort of like corduroy, which looks and feels cool. However, we have found that much like corduroy pants, when you walk the cabling rubs together creating a vibration on the cable line which you can make out during softer music. This may or may not annoy you, but since we only noticed it during the quieter times it wasn't a complete deal breaker, just an annoyance.

The V-Moda Vibe Duo was a clear winner in my eyes. Ignoring the rare occurrence of cable ruffling, it excels in many places where Apple's original buds fail. The cables are nodescript, the buds themselves have different sleeves to fit different ears, and the audio quality puts Apple's to shame, while not sacrificing cable length, microphone and remote features. We'd advise anyone looking for a high quality replacement to look the way of the Vibe Duo.