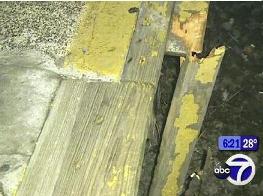 Stand clear of the platform edge and then some: A 14-year-old boy fell into the tracks at the Kings Highway subway station when the platform partially collapsed. Avi Katz was able to get away before the approaching Q train made it into the station.

Katz had been at the station around 6PM on January 29 and, per WABC 7, "stepped onto the edge of the platform to see if his train was coming." The platform, made of wood, cracked and Katz fell three feet into the tracks. Katz, accompanied by his mother and Assemblyman Dov Hikind, spoke at a press conference, "I was laying on the tracks and I was really scared. My yarmulke fell off and I didn't even care. I saw the train coming and all I could think was, 'Get up, get up - this isn't how I want to die.'"

Katz said it was hard for him to get up and after three attempts, he managed to get back to the platform. Though the MTA did patch up the platform, Hikind questioned the MTA's commitment to maintenance; pointing to the decrepit conditions (per WCBS 2, "crumbling concrete, rotted wood, and burned-out lightbulbs"), he asked, "This is our transit system that we spend billions and billions of dollars for it to look like this, at one of the busiest transit stations?"

And right now, Katz is too scared to take the subway: "I just, every single time I see the train pass by I'm thinking about me on the tracks."