Subway Masturbator Apologizes To Victim: "I Was Extremely Intoxicated"

On Sunday, a woman riding the N train from Manhattan to Queens was subjected to the sight of a man who pleasured himself while staring at her and even followed her off the train. And later that night, a man claiming to be the masturbator reached out to her to apologize, saying, "I am terribly sorry for my behavior. I was extremely intoxicated and I just want you to know i am deeply sorry."

The woman, who we'll call Jane, had written about the incident on her Facebook page, and posted the video, because she was so disturbed by what happened. She also contacted Gothamist, explaining, "I want everyone to be aware of this guy. I was on my way home this morning, got on the N at 42nd Street. This guy was doing this the entire way to Astoria Blvd. I waited to the last second to get off the train at my stop in hopes that he wouldn't follow me. Unfortunately, he did. When he saw me stopping at the attendant station, he bolted. Please make people aware."

Jane did file a report with the MTA on Sunday and contacted the police. She also got a few messages from women who said they recognized the man on the subway as someone they met on OKCupid; one even claimed she received an "unsolicited dick picture" from him after their first (and last) date. She checked other messages and found one from someone who had the same name as the bad OKCupid date:

My name is ____. Yes i am the guy from this morning and I am terribly sorry for my behavior. I was extremely intoxicated and I just want you to know i am deeply sorry. I really don't remember anything bit was notified about your post through a friend of a mutual friend. i would do anything to take back what happened.

I have never done this before and I am truly troubled specially that I don't even remember doing this. Please accept my sincere apologies
I am going to take action whether it's therapy or something else because I never want to do this again. Please please forgive me. I understand how terrible that must have been and want you to know I wish I could rewind time and erase this behavior

I hope you will believe me when I say that the normal me would have never done this.
Sorry I didn't to send my location don't know how that happened please forgive me I'm very sorry 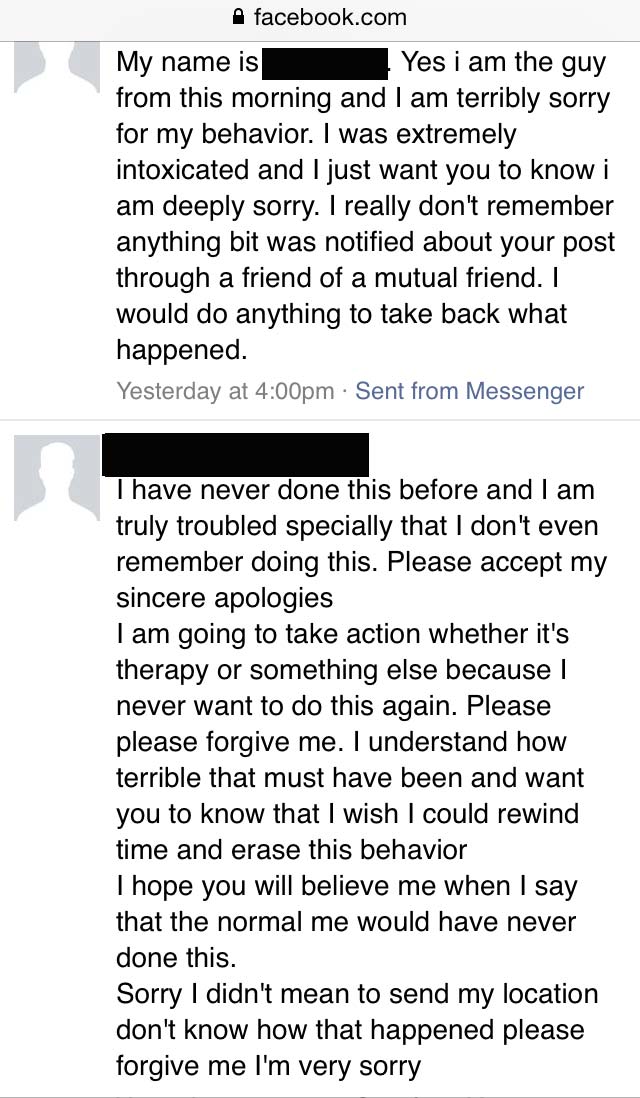 The "I was drunk" excuse is little comfort to Jane, who says the incident has shaken her. "I feel nervous on the train now, and anxious when guys sit next to me," she says, adding that she was unable to reply to him because his profile was then deleted.

Jane went to a police precinct near her work in Manhattan to report the incident, but officers there told her she would have to go to a precinct near Astoria Blvd in Queens, since it happened near there. Luckily, she had also reported the incident on the MTA's website, and she received two emails from detectives, who allowed her to file the report over the phone. The MTA's website says:

Harassment of someone because of that person's sex, gender identity, or sexual orientation is prohibited on the MTA bus, subway and commuter railroad network. Improper sexual conduct can take many forms and anyone can be a victim of it or witness it. It can include misconduct involving the actual or threatened use of physical contact or force, including rape, assault, unwanted touching, and other forms of physical sexual misconduct.

So no matter what, report any incident you witness or experience! Some of the women who believe they have interacted with the N train masturbator via online dating have contacted Crime Stoppers, too, aiding with the police investigation.

While Jane feels uncomfortable and violated after this incident, she said that it'll be worth it if no other women will fall victim to this guy's behavior. As for those who contacted Crime Stoppers and are trying to help identify him, Jane said, "I am so grateful they said something."

#n train
#sexual misconduct
#subway
#subway masturbator
#original
Do you know the scoop? Comment below or Send us a Tip