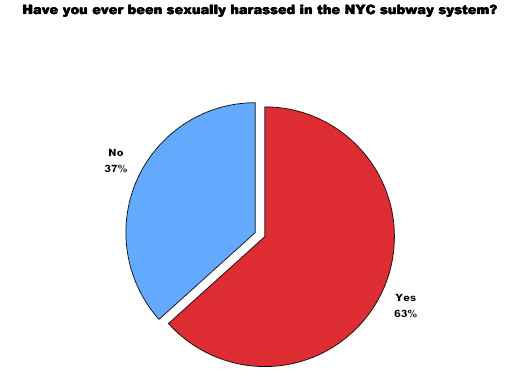 Last week, Manhattan Borough President Scott Stringer released a study finding that many New Yorkers have been harassed or assaulted on subways but most of the time, these incidents go unreported. Some key findings included:

Stringer said, "For far too long in New York City, there’s been a credo that what happens underground stays underground. That feeds a system where women, especially, are victimized, and instead of fighting back, become afraid, ashamed, and believe that nothing can be done.... Our goal is to raise the profile of these crimes, so that the police can formulate a plan to combat them, and so that the victims can be empowered to fight back.” Here are his suggestions to ensure that riders feel safer:

that the survey was emailed to 20,000 people (the Manhattan Borough President's office worked with a number of organizations, including the Straphanger's Campaign, Right Rides, NOW, Hollaback, to get out the word about the online survey), which suggests the statistics could be somewhat inflated, given that the almost 1800 respondents who did fill out the subway may have been weighted towards people who have experienced subway harassment (indeed, about 67% of the respondents are women). This is a point the study acknowledges as a limitation, but says it still serves as "an invaluable 'snapshot' of a problem that persists but is inherently difficult to quantify."

Indeed, many people (especially women) would probably say that subway rides are a time to be on the defensive. And when you are harassed or assaulted, your first inclination is to just get the hell out of there and not try to find a police officer or MTA clerk, as sometimes it can be tough to find them. Or at least that's what we wanted to do when we had to see a man pleasuring himself right next to us.

You can read the study here (PDF).