Roughly a week after the NYPD staged a highly publicized drill to prepare for a terrorist attack in the subway, a graffiti artist has made his own subterranean contribution to the "propaganda war" on terror.

VEW painted this Star Wars-themed message to ISIS in the unused Bowery subway station that last week was swarmed by NYPD counterterrorism officers (Ratter was there to document the graffiti artist at work in a video).

"It's a propaganda war and our side needs to step up its game," VEW told the website.

As of early this morning, when our tipster took these photos, the mural was still there. Like paid advertisements utilizing Nazi imagery on active subway cars, the painting in the unused station below Kenmare Street will likely be removed. 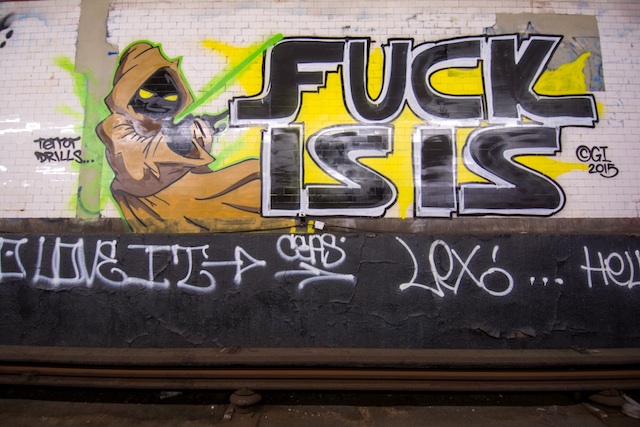 "I don't know or care what happens to vandalism committed in non-public parts of our subway system," MTA spokesman Adam Lisberg wrote in an email. "I'm just glad the evidence was documented so it can be used against the perpetrator in court."

In a 2014 interview with Animal New York, VEW said he was "very afraid" of being arrested for painting graffiti.

"But you have to realize and understand that what we do comes with consequences, so you just got to be on point for as long as you do this, and if you do get caught, you can’t get mad.”