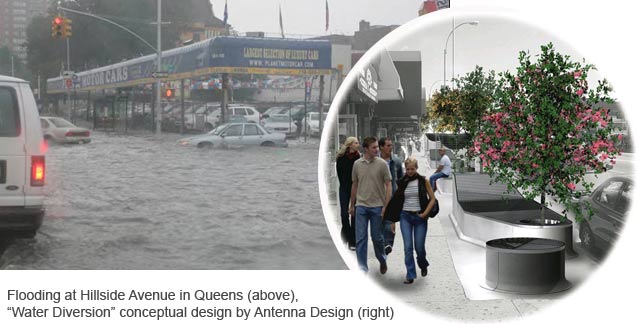 There was a bit in the MTA's August 8 Storm Report which mentioned that the MTA was working on some street furniture designs to "raise vent heights to prevent water inflow." As part of the recommendation to "Implement corrective action plan for top flood-prone locations," the MTA, with the Department of Transportation and Department of Environmental Protection, is developing short- and long-term solutions at the most flooding-vulnerable locations.

Perhaps a more promising and intriguing solution to the sidewalk grating and station entrance water inflow problem is already being pursued in conjunction with NYCDOT. In fact, in the last week the MTA, NYCT, and NYCDOT have co-sponsored a design charette with top urban designers to develop solutions to the problem. The three conceptual designs they came up with will hopefully lead to a more refined alternative that will address both pedestrian impact and neighborhood aesthetics. 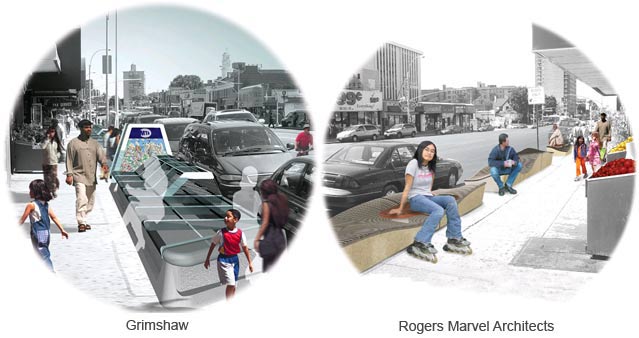 Essentially, by doing things like creating a step in front of subway entrances so water won't trickle down stairs or raising street grating, can help prevent flooding. There are renderings of possible street grate designs from Antenna Design, Grimshaw Architects, and Rogers Marvel Architects, and the designs were developed for the Queens Boulevard F Line on Hillside Avenue, which suffered terrible flooding. According to the storm report, the "MTA has already begun to work with the city and the Art Commission, which reviews all such street fixtures" and expects to follow the "more formal review process to come up with a final product that works for all" in the next 30 days.

What do you think of these designs? Some more storm report facts: The MTA will be embarking on $30 million worth of short-term improvements; the four stations with the most severe flooding are the 79th Street station in Manhattan and Parsons Boulevard, 65th Street and 36th Street, all in Queens; and flooding occurred at 26 locations, with six instances lasting between 3-8 hours and four others lasting more than 8 hours. NYC Transit president Howard Roberts Jr still said, "We did fantastically well in our recovery."