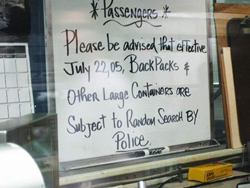 Communication technology connecting the MTA with its riders is becoming a laughable deficiency in comparison to other major cities with metro systems. Riders who were prescient enough to check the MTA's website to see if there were any delays on their lines related to the torrentional downpour Wednesday morning before they left their homes were out of luck and not alone. The MTA's site crashed under the volume of online traffic one might expect the agency to experience during a systemwide series of shutdowns when riders would be looking for information.

The New York Times describes how commuters in other cities receive updates on their phones and auto-generated emails while standing on train platforms, as New Yorkers are reduced to crowding around token booths in an attempt to decipher abrupt and always disappointing news of service interruptions on propped-up white dry-erase boards.

Compared with commuters in many of the world’s leading cities, subway riders in New York live in something of an information vacuum once they enter the system’s 468 stations. For decades, riders have regarded their creaking and antiquated subway network as a minor miracle, tolerating frequent delays, cramped stations and malfunctioning public-address systems.

But the storm this week, highlighting yet again deficiencies in how the authority gets information out, seemed to push riders past the limits of their patience. Those flaws are one focus of a 30-day review that Gov. Eliot Spitzer has ordered into what went wrong after the intense early-morning rains of Wednesday.

One of the improvements set in place for yesterday's rains: extra managers and employees dispatched to the system's busiest stations, some equipped with bullhorns. The Times describes the management of the MTA as being highly focused on major capital improvements and regular maintenance, like building the 2nd Ave. subway line, and maintaining aging signal and switching equipment. Avoiding massive customer frustration, like that experienced Wednesday, by providing current information is simply a lower priority.

Describing how the current NYC customer notification system works, the Times writes that employees stationed by train dispatchers record a telephone message describing disruptions. Station agents then listen to these recordings and attempt to transcribe their meaning on a dry-erase board. "'We keep an ample supply on hand,' Termain Garden, a transit official, said of the markers."