It's that time of year again—the Straphangers Campaign has released its 11th annual report on subway cleanliness. The latest and greatest "Shmutz" Survey found that between 2008 and 2009 there has been a steady decline in underground cleanliness, which probably means this hairball is still at the West 72nd Street 1/2/3 station. Of 22 subway lines, 50% were found dirtier than the previous year, when the R train was rank. Avert your eyes, D and M train riders, here's the basic breakdown (full tables after the jump):

These car cleanliness rankings were based on 2,200 observations by the Straphangers Campaign between September 3rd and November 24th, 2009. Cars were rated on cleanliness of floors and seats (clean = “basically dirt free," not clean = “moderately” to "heavily" dirty); litter was not taken in to account.

Last year's budget cuts included trimming down the size of the cleaning staff; the Straphanger Campaign's Gene Russianoff says, "It’s as clear as the grime on a subway car floor: MTA Transit cuts in cleaners has meant dirtier cars. And more cuts to come means more dirt for subway riders.” Recently the city's rodentologist suggested that the MTA start cleaning outside of the cars more frequently to curb the ratdemic underground (which, of course, doesn't really exist).

NYC Transit spokesman Paul Fleuranges told the Daily News, "With the current budget challenges...we acknowledge that some subway car floors may not be as clean as our customers expect or deserve. We will monitor conditions and shift forces as necessary. We also take the opportunity to remind customers to pitch in and help keep the subway as clean as possible by utilizing proper refuse receptacles." 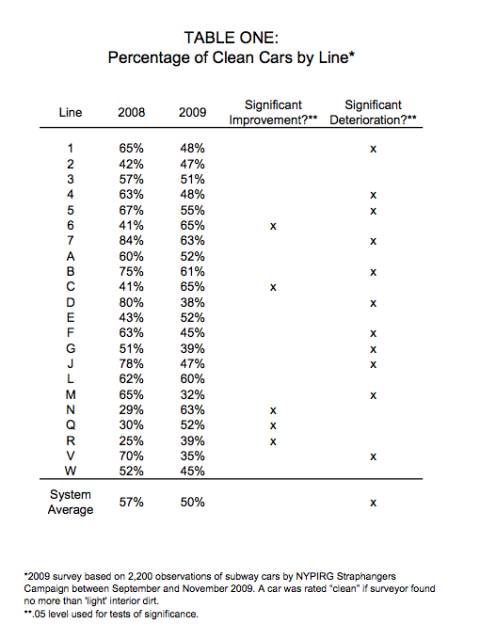 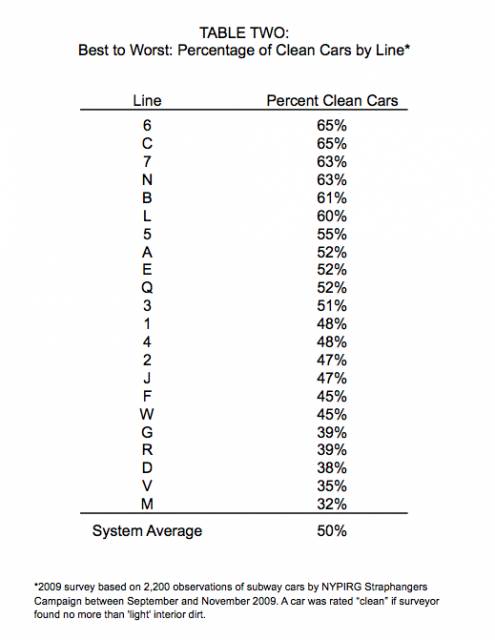