Subway Cat Georgia Is On The Mend 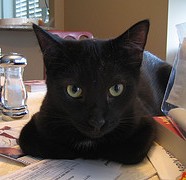 Georgia, the runaway subway cat rescued by a Con Ed meter reader and two determined MTA track workers, is resting up not just from her 25 days in the subway tunnels, but from surgery yesterday to repair a fractured leg. The doctors at Fifth Avenue Veterinary Specialists waited until yesterday to perform the surgery because Georgia was dehydrated at the time of her rescue and they wanted her stabilized before they performed the procedure.

The Daily News reports that the $1,500 reward for Georgia's rescue will be split three ways--between Christopher Cuddy, the Con Ed meter reader who initially reported Georgia's cries in the area where she was rescued, and MTA track workers Efrain LaPorte and Mark Dalessio, who meowed while they worked in an effort to locate Georgia. The Mayor's Alliance for NYC's Animals contributed $1,000 to the reward after an anonymous donor offered $500 via City Critters. Chris Cuddy told the News that he plans on turning around and donating his $500 share of the reward to the ASPCA.

Not Georgia, but another cute black cat