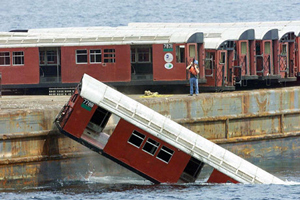 Hundreds of subway cars will be sleeping with the fishes - and much more aquatic life - as the MTA approved a plan to send old cars from the C and E lines to the Garden State for artificial reef-building. NYC Transit assistant chief of operations Mike Zacchea explained, "They create a cave-like structure that let young hatchlings mature. Within 30 days, marine life attaches to the car body."

Earlier this month, NJ environmental officials asked for the decommissioned and stripped cars to be dropped into the Atlantic. Unlike the ocean bed off New England states, which are rocky, the ocean floor off the Mid-Atlantic states are sandy and relatively featureless. The addition of artificial reefs to the underwater environment is hoped to cultivate populations of fish, lobster, and other marine life.

New York disposed of many of it's 1,300 retired Redbird cars earlier this decade by donating them to artificial reef-building programs up and down the eastern seaboard. NJ stopped accepting them in 2003 after environmentalists raised concerns that the asbestos in the Redbirds could harm marine life. Studies by other states that sunk subway cars and by federal officials have satisfied NJ sufficiently, however, that it should go ahead with further artificial reef building using New York's retired subway cars.

The Times had reported that a critic of the plan hoped "New Jersey officials would ask for the subway cars with the least amount of asbestos." The economics are interesting: The MTA will spend over $6 million to send the train cars to NJ, which sounds like a lot until you learn that it would cost $27 million for the MTA to strip the cars of asbestos.

#environment
#garden state
#MTA
#new england
#new jersey
#new york
#nj
#nyc
#nyc transit
#subway
#The MTA
#the times
#train
#transit
#transportation
Do you know the scoop? Comment below or Send us a Tip
A new Gothamist is coming! We’ve moved comments over to our beta site. Click here to join the conversation and get a preview of our new website.