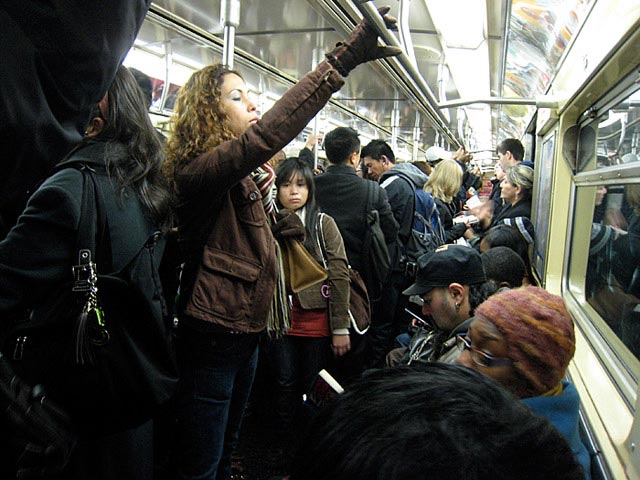 Photograph of a crowded E train by milkshakepants on Flickr

While the MTA doesn't want to comment yet on how they might close the $1.2 billion budget gap, the speculation continues. The Daily News thinks the "base fare will likely rise into the $2.50-to-$3 range," adding, "Officials haven't set new target prices for the unlimited-ride MetroCards." Yesterday, the News details how service would be cut, like eliminating the Z, cutting G and M service in half, and running trains less frequently over night.

The NY Times reports the MTA "will seek to increase fare and toll revenues by 23 percent next year to plug a yawning budget gap." The Times adds the base subway and bus fare will be at least $2.50, prompting one person to wonder, “It’s going to be fewer trains but the fare’s going up?”

The News adds that there will probably be HUGE fare hikes for the disabled and express bus riders: Access-A-Ride, which now costs $2, will double and express bus riders face a 50% hike, with fares moving from $5 to $7.50. Officials tells the News that those two services "carry few riders and reap little revenue. They have the lowest per trip revenue-to-expenses ratios in the MTA network."