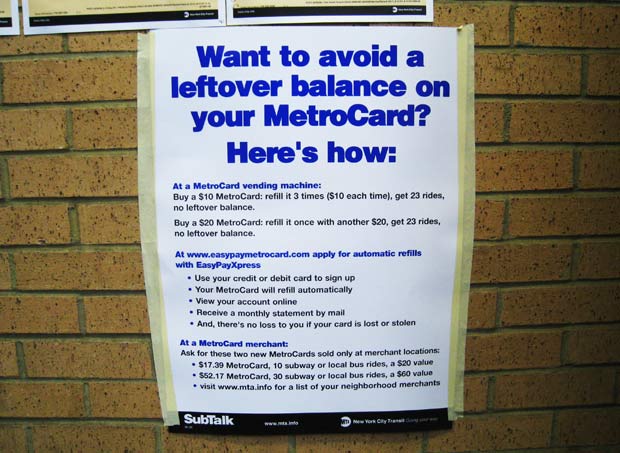 The MTA's various fare hikes for the NYC subways and buses, as well as its railroads, went into effect this weekend. Today, subway and bus base fares still cost $2, but higher-value pay-per-ride Metrocards have less of a bonus discount while weekly and monthly unlimited ride Metrocards are more expensive.

You can read more about the fare hikes here, but two important notes: (1)Unlimited ride Metrocards purchased before March 2 are still valid as long as they are used before March 10; and (2) Pay-per-ride Metrocards will still have bonus discounts, but there's a somewhat more complicated formula for the discounts (as evinced by the poster above).

One Staten Island family's increased transit expenses - almost $1000 more a year - are detailed in the Post because of the "double whammy": MTA fare hikes as well as Port Authority toll increases. One MTA rail rider whose Metro-North monthly pass costs $10 more told the Daily News, "It's still the most affordable way to commute to and from the city. If the subway goes up then I'll be upset." But then the reporter told her subway fares were going up, to which she said, "You are breaking my heart."

The News also helpfully points out MTA Executive Director Eliot Sander has a chauffeur (a police detective), who made $70,000 in overtime last year. (Flashback: In 2006, he told the Sun he'd be taking the subway to work.) Some reasons Sander has a chauffeur: He works late, he goes to job sites not accessible by mass transit, and he recently received a threat.

And we bet the fare hike is just salt in the wound for many F and G riders, after the weekend of the MTA making improvements to both lines. City Councilman David Yassky was critical, "These are life lines, the G in particular. They have no other choice. You know, people get very frustrated." He did, however, appreciate the transit workers who helped riders during the diversions.