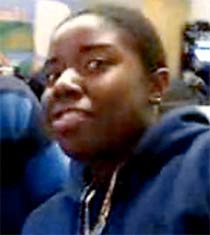 The 17-year-old girl who filmed the filmed a group of teen girls beating up a subway rider on an A train last month has met with the police yesterday. Kajdera Holmes's lawyer told the Daily News, "She regrets not doing more to help the victim."

Ward has also said that Holmes, who was arrested in September for assaulting a 24-year-old woman on a J train, had nothing to do with the attack, though she and the others had been coming from the same party. Ward said his client was cooperating with the police, "She feels bad that she posted it on YouTube ... Looking back, she realizes the appropriate response should have been to turn the tape over to authorities."

It turns out the victim is an manager at H&M, who finally spoke out. Rafael Cruz said he didn't fight because he's peaceful - and he'd do the same if attacked by men. He still hasn't decided whether to press charges (an MTA spokesman and the father of one of the girls who beat him would like him to press charges).