Subprime Murder/Suicide Not Related to Finances, But Personal Issues 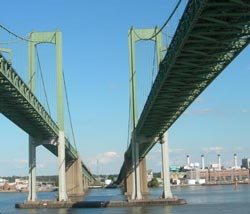 An executive at a subprime loan company that was financially circling the drain stated that the murder of his wife and consequent suicide was not related to money worries, but personal problems. Walter Buczynski was a 59-year-old vice president of Fieldstone Mortgage Corp., a mortgage lending company sinking into bankrupty. He'd told neighbors that he would soon be looking for a new job, but they didn't sense an irregular level of distress.

Nonetheless, Buczynski broke his wife's neck Friday in their New Jersey home through blunt force trauma. He then drove to the Delaware Memorial Bridge, where he exited his car and jumped to his death, leaving a suicide note. En route, he called police to report the death of his wife at their home. Walter and Marcie Buczynski had a nine-year-old son together and a 16-year-old son from a prior marriage. Marcie's father had recently died from cancer and her mother had moved in with the family. In the wake of their parents' deaths, the two boys are staying with the 16-year-old son's father.

The Baltimore Sun has a detailed account of a prosperous family sinking into what must have seemed like an inescapable pit of despair, one that ultimately drove Walter Buczynski to murder and suicide.