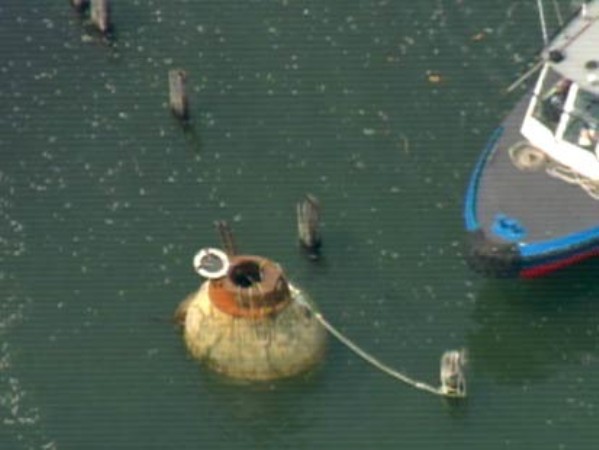 Totally weird: Authorities have found a "make-shift" submarine with three men in it near the Brooklyn Cruise Terminal. WABC 7 reports that the men may have been trying to "set sail off Brooklyn."

Right now, police do not believe there was anything terror-related, as a search did not reveal any suspicious materials. There were oxygen tanks, though.

No charges have been filed yet. It seems like one issue is that the sub may have violated the security zone of the Queen Mary 2. The vessel, which is shaped like an orb with a circular hatch, is tied up off Red Hook and can best be seen at Wolcott Street, near the Snapple Warehouse.

From 1010WINS: "The self-propelled submarine was escorted by police and the captain of the ship, from Greenpoint, was issued a Coast Guard violation for operating an unsafe vehicle and violating the security zone around the Queen Mary II." And WCBS 2 is describing the sub as a WWII-replica.

UpdateThere's a Flickr set of the submarine, Adventures with an Egg, that reveals the artist behind the submarine may be self-described artist-patriot Duke Riley. Here's part of his artist's statement:

My work addresses the prospect of residual but forgotten unclaimed frontiers on the edge and inside overdeveloped urban areas, and their unsuspected autonomy. I am interested in the struggle of marginal peoples to sustain independent spaces within all-encompassing societies, the tension between individual and collective behavior, the conflict with institutional power. I pursue an alternative view of hidden borderlands and their inhabitants through drawing, printmaking, mosaic, sculpture, performative interventions, and video structured as complex multimedia installations.

As it happens, we even interviewed him two years ago.

Thanks for the tip, Janelle!

Update: WNBC reports that three men were arrested: One was in the submarine, which is actually based on an American Revolution-era sub, and two were in an inflatable boat. The Coast Guard said, "Basically, the vessel was not safe to sail. It had no lights, no flares. It was not registered. Instead of safety violations, this could have turned into a search and rescue."