In April 2009, Mayor Bloomberg signed a bill giving NYC the toughest laws against vehicular idling, with stiff fines for repeat offenders. Three months later, AP reporters caught the mayor repeatedly flouting the law, with his chauffeur and security detail sometimes leaving their engines running for an hour while waiting for the mayor. Bloomberg had to apologize, but ever since he's presumably had a team of engineers working around the clock to come up with a solution to keep his SUV cool when he's not in it. Well, they finally had a major breakthrough, and yesterday they did some beta-testing! 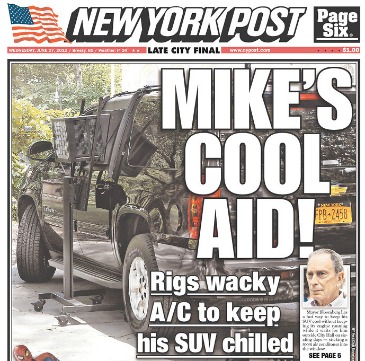 As you can see from these photos obtained by the NY Post, they're experimenting with a high-tech solution that will enable the mayor to step into a pre-chilled, hypocrisy-free SUV. To be honest, the science at work here is beyond our primitive understanding, but to put it in layman's terms, it seems engineers have connected what appears to be a standard residential A.C. unit onto the rear window of Bloomberg's SUV. Then, using a complicated series of "extension cords" and—no doubt—some sort of nuclear fusion, the A.C. unit will be "plugged in" to an electrical power source.

At press time, it was unclear how many miles of extension cord the mayor will need to conduct official business within the five boroughs, but clearly this innovation will be an enormous boon for New York's troubled extension cord industry. (Rumors that Bloomberg was sourcing the extension cords from Malaysian sweatshops could not be confirmed.) Speaking to the Post, Bloomberg's spokesman said yesterday was just an experiment, adding that "there is far less emissions corresponding to the power of a single air conditioner on the grid than idling a V-8 engine." And by attaching colorful plastic ribbons to the AC's vents, Bloomberg's backseat is bound to be far more festive!

#air conditioning
#global warming
#heat wave
#mayor bloomberg
#nanny state
#the environment
Do you know the scoop? Comment below or Send us a Tip
A new Gothamist is coming! We’ve moved comments over to our beta site. Click here to join the conversation and get a preview of our new website.