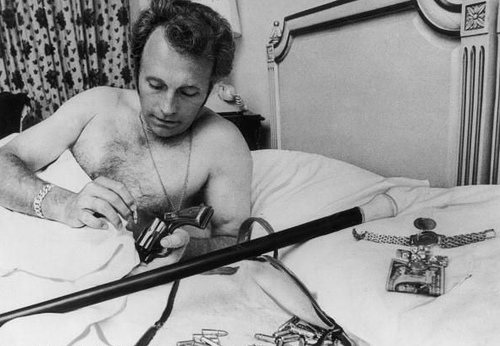 Today we have illusionists like David Blaine performing "stunts" in the city, but back in the day there was the real deal stuntman, Evel Knievel. Just after making news by making nice with Kanye West (after suing him over this video), he died yesterday in Clearwater, Florida at the age of 69.

The NY Times reports he had "failing health for years with diabetes and idiopathic pulmonary fibrosis, an incurable lung condition. In 1999, he underwent a liver transplant after nearly dying of hepatitis C, which he believed he had contracted from a blood transfusion after one of his many violent spills."

Before his health took a turn for the worse, he sought out new ways to conquer fear and escape death. In 1971, after the government wouldn't allow him to jump the Grand Canyon, he considered alternative ideas that would get some publicity -- one of which was jumping from one skyscraper to another in New York City. Alas, this never happened. Describing himself as an "explorer" above all else, the thrill seeker retired from stunts in 1980 by stating he was “nothing but scar tissue and surgical steel.” And earlier this year he told the world he "believed in Jesus Christ" for the first time, something he previously avoided because he didn't want to give up his life of "gold and the gambling and the booze and the women."

In the above photo Knievel gets ready for bedtime in a New York City hotel in 1977, arming himself with a .38 Smith & Wesson after kidnapping threats against his children were made. To read more about his spectacular life, there's a thorough rundown on Wikipedia and The NY Times recaps his (good and bad) adventures, here.