Rising sea levels due to carbon emissions could cause New York City and Long Island's coats to regularly experience the kind of flooding levels that were last seen during Hurricane Sandy, according to a report by the Union of Concerned Scientists.

UCS's study looked at what they called "chronic inundation," or the phenomenon of an area experiencing flooding 26 or more times per year (which works out to twice per month at least). The report looked at a number of coastal communities at risk due to climate change, and extrapolated what kind of flooding would come to the towns and cities on the American coast in 2035, 2060 and 2100 without efforts to curb climate change.

In the case of New York City, the worst of the flooding wouldn't hit most of the city until 2100. However, by 2060 rising sea levels could mean regular flooding in Coney Island and one-quarter of Long Beach. The study also included a map that showed the areas on the coast of Long Isalnd that could face chronic inundation by 2100, including Kennedy Airport. 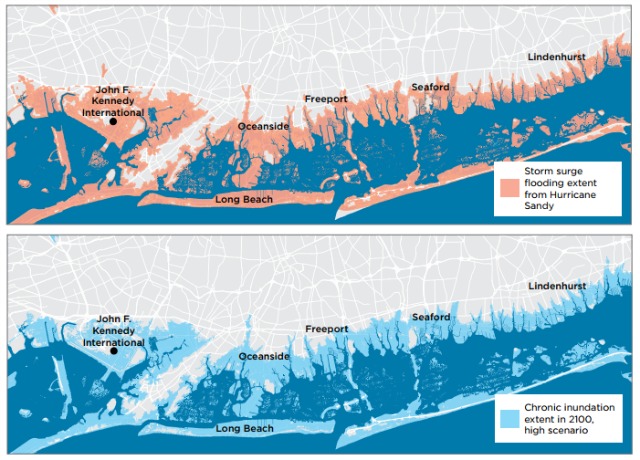 The report does specify that tidal flooding isn't as immediately destructive as a storm surge from a hurricane, "but the regularity of this flooding could be destructive in its own way."

The report recommends, unsurprisingly, that the United States should abide by the Paris Accords in order to spare places like New York from the worst of the potential consequences from rising sea levels. In addition to recommitting to the climate change deal, the report suggests that the city must " limit development in flood-prone areas" and "safeguard flood-protective natural ecosystems." In related news, a $4 billion flood wall and levee plan to protect the Rockaways isn't close to funded, and "a significant amount of the sand replenished in Rockaway by the Army Corps in 2014 after Sandy has already been washed away."

#climate change
#doom
#rising sea levels
Do you know the scoop? Comment below or Send us a Tip