One of the truisms of modern "Rent Is Too Damn High" New York City is that rent-stabilized apartments are all but impossible to find unless you're lucky enough to inherit one from a deceased relative. And a new report issued today by the Community Service Society helps explain why: It details how more than 150,000 rent-regulated apartments have been converted to market rate since 1994, in the wake of a series of state and city laws that gave landlords a panoply of new ways to hike rents — laws that could soon be up for reconsideration by the newly Democratic-controlled state legislature.

Rent stabilized and rent controlled apartments were not always the rarity they are today, according to the report, "Rent Regulation in New York City: How it works, what went wrong, and how to fix it." At its peak in 1970, nearly 90 percent of all housing in the city was subject to some form of rent regulations: 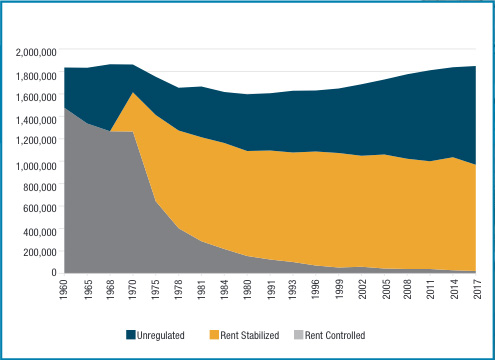 Regulated housing in New York City has plummeted since the 1970s (Community Service Society, based on city Housing and Vacancy Survey data)

The conversion of rent-regulated apartments to ones with no limits on rent has been especially swift since 1994, according to the CSS report. Between 1994 and 1997, when the state codified city laws allowing landlords to deregulate apartments once they cleared $2,000 a month and added a 20 percent "vacancy bonus" for apartments that become vacant, 43,642 apartments were removed from the rent regulation rolls.

The number of apartments removed from rent regulation rolls reached 118,113 by 2003, when the state first began allowing landlords to hike "preferential rents" (those lower than the legal limit) to their maximum as soon as a lease was up for renewal. By 2011, that number hit 239,856, when the "high-rent" deregulation threshold was raised to $2,500 a month; and soared to 276,777 by 2015, when the threshold was raised to $2,700 and pegged to annual Rent Guidelines Board increases.

Of that number, CSS calculated, fully 155,664 apartments left the rent-regulation rolls because of the new laws allowing landlords to swiftly raise rents to the threshold where they could be removed from rent regulation entirely.

Breaking down which specific laws led to how many apartments being deregulated is more difficult, says Oksana Mironova, the CSS housing analysis who authored the report. For landlord tricks like requesting rent hikes under the Major Capital Improvement and Individual Apartment Improvements programs for renovations, then using the higher rent figures to evade rent regulation, Mironova says it's impossible to separate out the effects, because they work in tandem to collectively inch up rents above the deregulation threshold.

The possible repeal of these landlord-friendly laws is expected to be a major topic of discussion in this year's Albany legislative session. State Senator Jose Serrano has already introduced a bill to repeal the 20 percent "vacancy bonus" that landlords are allowed to tack onto rents every time an apartment becomes vacant; and State Senator Liz Krueger has indicated she intends to introduce legislation repealing other landlord rental bonuses as well.

In his State of the State address yesterday, Governor Andrew Cuomo endorsed an end to vacancy decontrol, and also proposed making preferential rents permanent for the duration of a tenant's stay. "So if you're a tenant and you have a preferential rent, as long as you stay in the apartment, the landlord [couldn't] suddenly jump up to the legal rent," explains Mironova. "Right now, when you sign the lease, every single year there's the chance that the rent could go up to the legal rent."

Of course, allowing rents to make huge leaps on vacancy but not for existing tenants would risk creating more incentives for landlords to push tenants out. It's just one reason why, housing experts say, reform of rent laws is best handled as a package deal, not piecemeal.

"The changes have to happen in tandem," says Mironova. "All of the loopholes that exist, the state legislature has to think of them all as working together, as opposed to trying to pick it apart bit by bit."

#affordability crisis
#affordable housing
#rent
#rent laws
#renting
#tenants
#original
Do you know the scoop? Comment below or Send us a Tip