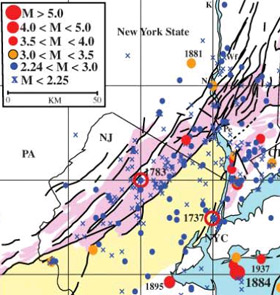 A new study from Columbia University's Earth Institute says there is a "substantially greater" risk for an earthquake in the NYC area than previously thought. Per LiveScience, "A pattern of subtle but active faults is known to exist in the region, and now new faults have been found. The scientists say that among other things, the Indian Point nuclear power plants, 24 miles north of the city, sit astride the previously unidentified intersection of two active seismic zones. ."

While large earthquakes in the 6 or 7 magnitude range are rare (7 magnitude earthquakes come every 3,400 years), the fact is it's unclear when the last big one hit. John Armbruster from Lamont-Doherty Earth Observatory said, "Today, with so many more buildings and people, a magnitude 5 centered below the city would be extremely attention-getting. We'd see billions in damage, with some brick buildings falling. People would probably be killed."

The NYC Office of Emergency Management says earthquakes are "uncommon in NYC, [but] tremors occasionally occur." Here's a list of the biggest earthquakes in the NYC area--the most recent were 2.6 magnitude tremors felt on the UWS of Manhattan and in Queens. And a fun fact: WNBC anchor Chuck Scarborough wrote a disaster novel called "Aftershock: Earthquake in New York" that was made into a made-for-TV movie starring, among others, Jennifer Garner, Tom Skerritt, Erika Eleniak, Charles S. Dutton and Cicely Tyson.