A new study on the people who made up Occupy Wall Street confirms some stereotypes of the movement, but illustrates overall that protesters were responding to a climate of economic hardship that cut through many income and education levels. Researchers writing for CUNY's New Labor Forum found that 80% of the protesters surveyed held a bachelors degree or higher, and that 67% were white—37% lived in a household that had an income of more than $100K annually. But 40% of the protesters had more than $1,000 in student loan debt (that number was 54% for those under 30), nearly 29% had more than $1,000 in credit card debt, and 30% had lost a job in the preceding five years.

“Many participants had a personal connection to the economic crisis that helped spur the Occupy movement,” said Ruth Milkman, sociology professor and co-author of the study, in a release. “You had people graduating from high school and college, only to find that the economy wasn’t working for them.” Professor Milkman, and two other professors, Stephanie Luce, and Penny Lewis, interviewed 729 protesters during last year's May Day events, and conducted longer interviews with 25 people "who were core activists in the movement."

Perhaps not surprisingly, 42% of those surveyed said they had attended 30 or more protests in their lifetime (white respondents being more likely to be "actively involved" than people of color—60 to 48%). But this chart displays how the stagnant job market and the shrinking of income over the last 40 years spurred people of many different professions to protest. The most common reason given by protesters for participating (47.5%) in Occupy was inequality / "the 1%". 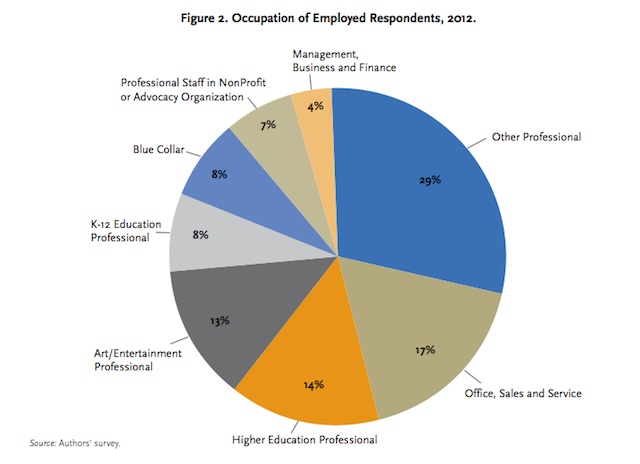 Penny Lewis, one of the report's co-authors, cautions that the sample may have been heavy on "higher education professionals." "There were so many people from PSC CUNY, as it was a union-sponsored rally, so that particular portion of our sample was certainly over-represented, and would have likely looked different if we had surveyed people in Zuccotti in say, November of 2011."

The study also credits the movement's strategy of not making specific demands for attracting supporters who might otherwise be alienated by a finite list of ultimatums. Organizer Stephen Lerner is quoted at length:

They dealt with the biggest demand, that the whole thing’s broken. That’s what was powerful. There was total clarity on who the bad guys were. The fact that it was Occupy Wall Street, in Wall Street, versus Occupy the Post Office or Occupy the Senate, was critical. That’s what made it different. They captured what everybody knows on some kind of subconscious level about who’s really running the country and who’s in charge. What excited them was that somebody was standing up and being furious, and that was the kind of thing you heard people say, “Finally somebody saying we’re going to take a stand!”

The report's researchers also add that the Occupy movement will have a longstanding impact on American political discourse (not to mention Occupy Sandy or Occupy the Pipeline, among others). “Many protestors were deeply radicalized by their participation in Occupy and will likely continue on a life path that includes progressive political activism,” Luce said. Penny Lewis adds

Not only did Occupy succeed in focusing the national political conversation on economic inequality, it also gave birth to a new generation of activists with a political vision and collective identity that will guide them for the rest of their lives. Much like those who came of age politically in the 1960s and kept their worldview after the movement faded, the effects of Occupy will reverberate for years to come.

You can read the whole report here [PDF].