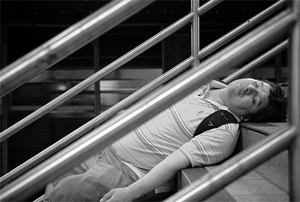 Almost half of all accidental subway fatalities happen to riders with alcohol in their bloodstreams, according to a study by Columbia University’s Mailman School of Public Health, which looked at data on subway deaths between 1990 and 2003. 145 of the 315 accidental fatalities during that time period were found to involve some degree of alcohol, though the report doesn't specify how blotto the victims were, if at all.

Nevertheless, report co-author professor Robyn Gershon is calling for a public information campaign in the subway urging riders to drink and commute responsibly (May we suggest they hire John Ratzenberger for a "Drinking and Riding: What's up with that?" ad series?) Gershon says, "Given that more than 75% of households in Manhattan and more than 50% of those in all of NYC do not own a car, there may be a sense that drinking alcohol to the point of intoxication is not risky since people are not driving." (Manhattan had 43% of subway-related fatalities, more than any other borough.) Speaking to the Post, Gershon also noted that "with the changes to the financial picture in New York, there's talk of an increase in alcohol intake."

The report is long and difficult to read with a hangover, but you can download a PDF here. Other grim stats, like how 343 of all 668 subway deaths between 1990 and '03 were suicides, can be found in the report's fun summary.