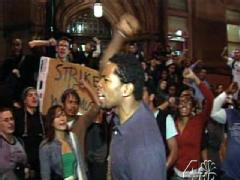 Faculty and students are reeling after a noose was found on the door of a black professor's office at Columbia University's Teachers College yesterday. The NYPD's Hate Crime task force is investigating the incident and the professor has been identified in the media as Professor Madonna Constantine, whose interests are listed as "Cultural competence in counseling, training, and supervision. Mental health issues of people of color in the United States and immigrants. Vocational issues of adolescents and college students of color."

About 100 students marched to Teachers College late last night, and the Bwog reports they yelled chants like "We will not be silent!" and "Bollinger's house for justice!" Another rally will be held today in front of Columbia's Arthur Zankel Hall at 2PM, before a town hall meeting. One professor said, "You might expect this stuff at the undergraduate level, but not here. We've never had any ethnic or racial tensions." A source told the Post that the police are "investigating whether another professor put the noose there rather than a student...another professor who had a rivalry with her and was jealous over the work she did."

Teachers College president Susan Fuhrman sent out a statement condemning the incident yesterday and the Columbia Spectator received a written statement from Columbia president Lee Bollinger: "This is an assault on African Americans and therefore it is an assault on every one of us. I know I speak on behalf of every member of our communities in condemning this horrible action. I also want to express our full support of Teachers College and President Susan Furhman in dealing with this matter." Still, many students want the school to do more.

Update: WCBS 2 adds more details to the police lead about a dispute between Constantine and another professor:

Constantine told police the other professor, a woman of Indian descent, had replaced her while she was on an extended leave, and grew upset when she returned to reclaim her position.

"There's apparently ill will about that," said the official, who spoke on condition of anonymity because the investigation had not been completed.

The official stressed that the dispute was only one possible lead, and that there were no official suspects as of Wednesday morning.