Strip Club Owner "Had No Respect" for Lap Dancers 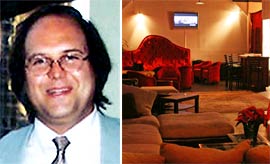 The lawyer accused of operating a strip club/brothel in Midtown was held on $150,000 bail, as was his wife. And his employees spared no details about Lou Posner while talking with the tabloids.

Posner and wife Betty owned the Hot Lap Dance Club on West 38th Street, which featured strippers, sex shows and "private rooms" where police claim customers could buy more intimate time with dancers, not to mention procure drugs from a house dealer. One dancer told the Daily News, "He had no respect for us," while another said, "He treated the girls as if they were property."

The pair estimated that 120 women worked there. Some were Americans who operated as independent contractors and paid $80 a night in "house fees;" others were Russians who worked to pay off debts to their handlers.

The two dancers said the house fees were waived if the girls agreed to go to a private room with Posner, who allegedly laundered his ill-gotten profits through a nonprofit voter registration organization.

The News describes the private rooms as "half-dozen curtained cubicles, each with a narrow bed, desk and a box of tissues." A source for the Post said, "Lou is a scumbag. I hope he burns in hell."

A lawyer for the Posners, who rent a $10,000/month apartment in East Midtown, claims his clients didn't know there was prostitution occurring in the club and says their bail will probably be posted tomorrow.

#crime
#hot lap dance club
#lou posner
#money laundering
#prostitution
Do you know the scoop? Comment below or Send us a Tip