Stringer: Truck Driver Who Killed Harlem Boy "Shouldn't Have Been On That Block"

Days after a 6-year-old boy was tragically run over by a tractor trailer a block from his school in East Harlem, politicians are calling for changes. On the morning of February 28th, Amar Diarrassouba was killed by the truck as it turned north onto First Avenue from East 117th Street, a residential street. Today Manhattan Borough President Scott Stringer joined State Assemblyman Robert Rodriquez and Councilmember Melissa Mark-Viverito for a press conference outside of the boy's school to call upon the DOT to introduce more traffic-calming measures, as well as "zero tolerance" for big trucks on narrow, residential streets. 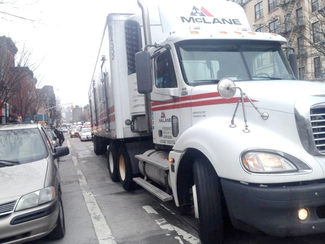 The news conference, led by Stringer, was intended as a "call to action, a shot across the bow to the Department of Transportation." Since 2009, Stringer said, "three other children have been struck and killed by vehicles within seven blocks of [P.S. 155]." Stringer, backed by assorted community members, used the conference as a formal request for new pedestrian interval signals and speed limit signs with flashing lights—both of which can be found in other parts of the city. Of the 145 pedestrian interval signals in all of Manhattan, there are currently only 2 in the neighborhood. "Basic safety signage that is so prevalent around our city [is], for some reason, not in El Barrio in East Harlem," Stringer told reporters.

Demanding better enforcement of truck routes in the community, Stringer pointed out that the tractor trailer did not belong on 117th Street in the first place. Manhattan has "1000 miles of truck routes...[so] that when big, 18-wheelers come barreling into our city to deliver goods, there is a prescribed route they have to take." Just one block away at 116th Street is one of those predetermined truck routes, "meaning that the truck that hit Amar should not have been [there] at [that] intersection. It is simply inexcusable that that truck driver, disobeying that truck route, comes to a narrow intersection where of course he couldn't see that little 6 and 1/2-year-old. He shouldn't have been on that block. Yet it's a slap on the wrist and you go on to your next delivery as if the accident never happened."

This heartbreaking first-hand account submitted to the New York Times by a local doctor who came across the scene of the accident dramatically underscores the dire traffic conditions and the very human cost. According to the doctor, 117th Street is a "one-way residential street in a bustling neighborhood, packed with potholes, and narrowed by double-parked cars." Stringer wants the NYPD to investigate this disregard of trucking routes, though he stopped short of demanding criminal penalties, instead deferring to the Manhattan D.A. Violation of pre-determined routes currently results in a summons, not arrest.

Stringer told reporters he would be sending a letter to the DOT demanding changes, which Streetsblog finds curious, in light of the fact that the "DOT is expected to continue its implementation of protected bike lanes and pedestrian refuges in East Harlem this year — a project that was, for a time, obstructed by Stringer appointees to Community Board 11." 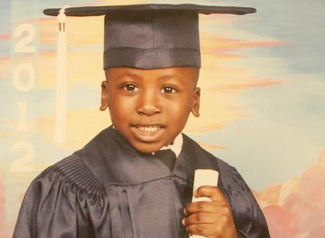 "What has been clear to many of us that live in this community is that there are incredible disparities with the resources that come to East Harlem and El Barrio as opposed to other communities," said Councilmember Melissa Mark-Viverito. "And we need equity and equal consideration despite the income makeup and the racial makeup of this neighborhood". It has since been revealed that the crossing guard assigned to that intersection was not present at the time of the accident and allegedly lied to a supervisor about being at her post. Mark-Viverito questioned the process and assignment of crossing guards around the city, arguing, "There also have to be questions raised as to how is it determined where and how many crossing guards are placed. We don't have enough crossing guards to be at every intersection."

Stringer ended the conference offering condolences to those mourning the young family killed yesterday in Brooklyn: "We would be remiss if we didn't recognize the folks in Brooklyn who are mourning the tragic loss of the family that was killed by the driver who did not stop and ran away like cowards...whether it's a child dying on the streets of El Barrio or in Brooklyn, we want a city-wide response. Better coordination, better traffic enforcement and safety, even in tough fiscal times we've got to provide for our citizens... What's the point of having 1000 miles of dedicated truck routes if the trucks don't follow the routes?"

#Amar Diarrassouba
#east harlem
#scott stringer
#truck routes
#original
Do you know the scoop? Comment below or Send us a Tip