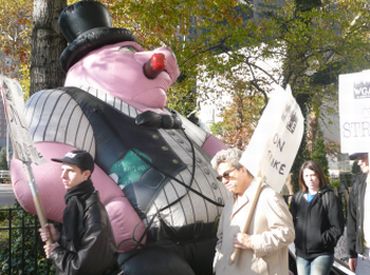 Make sure you’re sitting down before reading further: Today TV bloggers formed a virtual picket line to support the Writers Guild strike. We’ve been refreshing Ramblings of a TV Whore all day, hoping for some blogging scab to post something!

All this strike activity is becoming quite the trend; CBS News writers are expected to join their more gifted and talented “creative” colleagues who are entering week two of the strike. The CBS News scribes insist it’s not because they're jealous of all the attention the other writers are getting, but because of long-stalled contract negotiations with the network.

While the Writers Guild East grumbled and walked in dizzying circles (pictured) downtown at Battery Park today – apparently to send a message to greedy pigeons – the Broadway stagehands strike entered day four. With the strike costing the city lost revenue to the tune of some $5 million to $17 million a day, Mayor Bloomberg reiterated his offer to mediate the strike, which was declined by the stagehands’ union without comment. A Post editorial criticizes the union – surprise, surprise – for “spurning” Bloomberg’s “wholly impartial” offer, which the league of producers was eager to accept. Our fair and balanced view? The union is understandably apprehensive about being cornered into talks mediated by a billionaire, aggressively pro-business mayor; if the talks collapse it’s not hard to imagine which side will be painted as the spoiler.

Still catching up on why the Broadway strike is even happening in the first place? Cleanse that briny Post editorial from your palate with a shot of this short Times article on just what the stagehands really want. For the completist, Steve on Broadway has a running compendium of every relevant Broadway strike article you’ll ever need to impress your waiter, plus insightful commentary. But the best blog analysis of the day award goes to The Playgoer, who takes dead aim on the head of the producers' league, Charlotte St. Martin, and reminds us of the big picture in Bush’s America:

Make no mistake. The producers have quite strategically decided to play hardball on this strike. Maybe because they know we live (still) in a right-wing, pro-business, anti-labor political climate and they don't care about the sympathy of average workers.

But it's also clear that new president Charlotte St. Martin has ushered in a new era in Broadway business relations. For starters, she comes from the mega-corporate hotel management--I'm sorry, "Hospitality" sector. The hotel services employees union is famously huge and powerful--but because it's huge I imagine St. Martin is used to dealing with labor impersonally and ruthlessly.

We only hope that as the Broadway strike plods forward, theater bloggers don’t take their cue from TV bloggers and go dark, leaving us stranded without any good pull quotes.