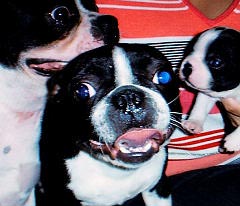 A tiny Boston Terrier named Ginger was literally ripped right off its owner's leash yesterday and sucked into the moving parts of a Dept. of Sanitation street sweeper. Robert Machin was getting into his car parked on the side of a street in the Soundview section of the Bronx. The door of his Honda Civic was still open and Machin was in the process of moving his dogs into the car, when witnesses said that a street sweeper suddenly swerved towards the Civic, and Ginger was swept up in the vehicle's brushes.

Multiple witnesses described how the sweeper was traveling relatively fast--approximately 30-40 m.p.h.--and swerved right as it got to Machin's car to avoid a speed bump in the street. The distraught owner chased after the street cleaner for a few blocks before getting his attention, but the driver refused to even turn off the spinning machinery until he had driven back to the scene where the dog was killed.

The body of Ginger was eventually extricated from the vehicle and returned to her dismayed owner, although the driver was characterized as unapologetic and the Dept. of Sanitation said that situation was "unfortunate." Witnesses said that the driver of the street sweeper was wearing headphones during the incident. The Dept. of Sanitation said it will conduct a review of the incident.

#boston terrier
#bronx
#Dept. of Sanitation
#ginger
#street sweeper
Do you know the scoop? Comment below or Send us a Tip