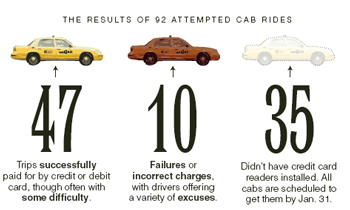 The New York Times recently dispatched no fewer than five reporters to the streets of the city in order to uncover the latest piece of breaking news: cab drivers can be rude and will attempt to take financial advantage of you if given the opportunity. The investigation uncovered a citywide fleet of yellow taxis in which just over half are compliant in installing credit card readers, and many that did have them falsely told passengers that using a credit card would result in additional charges.

Many cabbies, it seems, will use the card swipers only sullenly, and only after a resistance that can be as ingenious as it is misleading. Excuses range from, “There is a minimum cab fare for credit card use” to “The device doesn’t have to be activated until the new year” to “It’s too short a ride.” (Not true, not true, and not true, say city officials.)

Many cab drivers went on strike in September, in objection to the installation of credit card swipers, GPS tracking systems, and noisy video displays that can cost thousands of dollars. When the first strike proved unpersuasive, drivers went on strike for a second time in October. Neither effort proved successful and all cabs must be outfitted with the mandated equipment by the end of January. Still, the Taxi & Limousine Commission says that it has received hundreds of complaints from riders about drivers who refuse to let fares use credit cards or insist on a bounty for doing so.