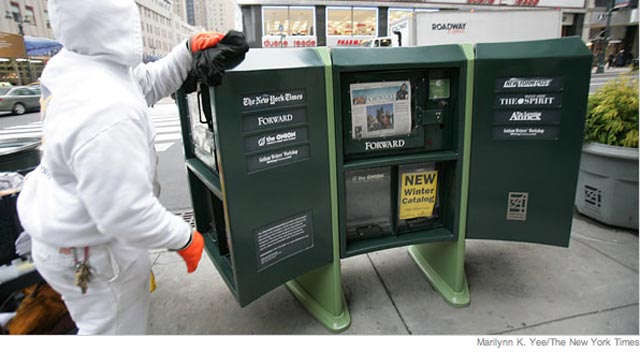 It's not exactly the cultural or architectural equivalent of the culture-shift that pitted modernism against traditionalism or historicism, but there's a war going on in New York's streets, and it's multirack paper boxes vs. single boxes. On one side are the expensive, well maintained, conservative multiracks that have been introduced into several different Business Improvement Districts (BIDs) around Manhattan. On the other side are the gatherings of cheap-loooking, graffiti- and sticker-covered, molded plastic or metal single boxes, often in garish colors.

Dan Biederman, the president of the 34th St. Partnership and the Bryant Park Corporation is unambiguous in his dislike of the single boxes. "If you were to look around at everything that’s ugly here that you’d be embarrassed to show to a visitor from Maine or Nebraska or Paris, it’s the news boxes.”

Vanessa Gruen of the Municipal Arts Society is frustrated with the fact that BIDs can shell out millions of dollars installing multiracks to spiff up their streets, and then have single boxes installed right next to them. She's looking for the City Council to pass a law that would require single boxes not come any closer than 300 feet to a multirack. In fact, last summer the MAS had a contest soliciting pictures of the rattiest looking single boxes around the city.