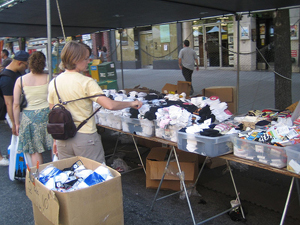 The Times stepped out on Sunday to gauge public reaction to the ubiquitous street fairs that turn various city blocks into a banal mob scene every damn weekend. Perhaps the best quote comes from awestruck Midwesterner Stephen Pijanowski, who loves street fairs so much he went to two over the weekend, explaining, "We have nothing like this in Chicago." On the other hand, New Yorker Javier Ortiz, on his way to brunch, declared the street fair to be "just in our way."

Last month Mayor Bloomberg trash talked street fairs in a town hall meeting, saying, "We have too many street fairs. Street fairs supposedly help communities by giving a lot of money. I don't think you can ever find a dime that they ever got from them. They're supposed to do unique things. They're all the same." There are 331 street fairs scheduled this year, down from 357 in 2007 and 369 in 2006.

According to the Post, the subject came up when Bloomberg was asked why the Summer Streets closures last August took place on Saturdays and not Sundays. (He explained that street fairs tend to occupy a lot of pavement on Sundays.) But the mayor seems reluctant to take action because he can "only fight so many battles." Also, the city collects 20 percent of vendors' fees for street festivals, which last year came to $1.6 million.

The Center for an Urban Future's 2006 report on street fairs said that the majority of street fairs are produced by three companies—and that it's difficult for smaller businesses/vendors to participate.

#blocks
#bloomberg
#city
#generic
#mayor
#street
#street fairs
Do you know the scoop? Comment below or Send us a Tip
A new Gothamist is coming! We’ve moved comments over to our beta site. Click here to join the conversation and get a preview of our new website.