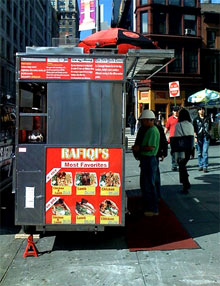 Ah, some details about the robbery that prompted the 4/5/6 subway lines to be essentially shut down during rush hour. Yesterday, we heard that an armed robbery suspected was in the tunnel between 116th And 125th Street along the Lexington Avenue sign, so NYC Transit shut down power to the line so the police could purse the thief.

The Post reports that a "thug robbed a street-cart food vendor on 116th Street and Lexington Avenue and dashed into the nearby No. 6 station" right before 4PM. Cops did follow him and try to search for him. They even brought in two K9 units!

But the thief still got away - apparently there are "at least three levels of tunnels" in that area. We're pretty sure some straphangers would have gladly joined in the search to track him down - tempers were boiling on those crowded, stalled trains. The unfortunate thing is that it seems some people waiting for trains along the line had no idea there were delays - hey, Transit Authority, we thought you were going to do a better job with alerting people to these issues! We have to credit the conductor on the uptown 6 train we were in (25 minutes to go two stops!) - he told us the police were searching for someone and strongly suggested we take other subway lines if possible.

Photograph of street food cart by neps on Flickr