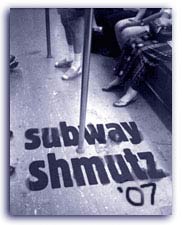 NYPIRG's Straphangers Campaign released its 2007 report on Subway Schmutz today and there was reason for encouragement. Overall, car cleanliness improved slightly between 2005 and 2007, but there was significant improvement on the 7 and L lines. The L line actually has the cleanest cars in the system according to Straphangers, with 88% of cars earning a clean rating versus 61% in 2005. The 7 train line was tied for second place, with 78% getting a clean rating versus 22% in 2005.

Starting in mid-September 2007, "additional cleaners were deployed at both terminals for these lines, working in multiple shifts to provide 24-hour coverage," according to MTA New York City Transit. Beginning on December 10, 2007, two new "line general managers" were appointed with greater authority to run the L (Greg Lombardi) and the 7 (Lou Brusati).

Riders of the East Side 4 line

had less to be enthusiastic about. The 4 train plummeted from the top spot in 2005 (94% clean) to a below-average 38% clean in 2007, so start stocking up on handiwipes and Purell. As for E train riders, there's mixed news -- on the upside, it showed the largest improvement of any line (2% clean in '05 to 29% clean '07). On the downside, it's still the filthiest train in the system.