An unidentified man has been spotted twice this month wearing a small swastika pendant necklace on the subway, according to tipsters. On both occasions the man wore large white headphones and a black athletic Nike shirt.

The necklace, which is legally protected as free speech, troubled riders who say the symbol is threatening.

"Check out the necklace," said Craig Lenti, an Astoria resident, who snapped pictures of the man while standing next to him on the Queensboro Plaza subway platform on August 20th. "A Nazi. Out AND proud in Queens today. Isn't this just a wonderful world we live in?!?"

"These people are becoming emboldened in a way that is terrifying. As a member of the LGBT community and an active supporter of the Black Lives Matter movement... this disgusts me," Lenti added, via email. "I'm concerned for my safety on a daily basis. And today, in my hometown, I stood across from a man who celebrated a hate group that brutally murdered many like me."

One 32-year-old New Jersey woman said she believes the man is provoking fellow straphangers, setting off the swastika against his black shirt. She saw the man on an E train after boarding at 42nd Street on Sunday afternoon, August 27th.

"The Nazi swastika, displayed in this way, is a clear attempt at intimidation," she said. (The woman asked that we withhold her name for fear of retribution.)

"It is a statement that the wearer does not believe that large groups of people deserve to be alive," she added. "This ideology terrifies me, all the more so if people are proudly and publicly endorsing it. It implies that they think they are immune to censure, that they can act against marginalized groups with impunity." 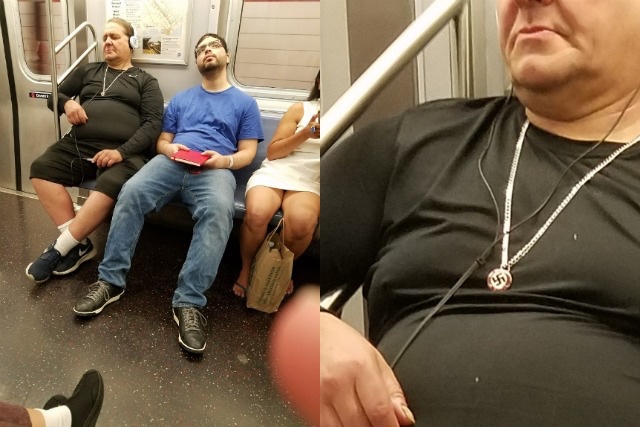 Wearing a swastika is protected under the First Amendment.

"You are allowed to wear whatever type of necklace you would like in NYC," a spokesperson for the NYPD told Gothamist.

"A swastika drawn in a public place would be a crime so you can call 911 or your local precinct to report it," the spokesperson clarified.

Etching, painting or drawing a swastika on "any building or other real property, public or private, owned by any person, firm or corporation or any public agency or instrumentality, without express permission of the owner or operator of such building or real property," is a class E felony.

Hate crimes have increased in NYC since the election of President Donald Trump, whose campaign featured blunt racism, sexism and religious discrimination.

According to police statistics, hate crimes in New York City leapt 106 percent this past March, compared to the same time last year. Of 128 reported hate crimes in March 2017, 65 were anti-Semitic—the largest complaint category by far.

There have also been numerous sightings of swastikas on the subway and in other public places in 2017. New Yorkers have responded by altering or removing the hate symbols, and rallying against the racism they signify.

This month, there has been a surge in petitions and actions to remove symbols of the Confederacy, in the wake of violence committed by white supremacists in Charlottesville, Virginia. Mayor Bill de Blasio recently announced a 90-day review of "all symbols of hate on city property."

"Since Charlottesville, the Anti-Defamation League has fielded numerous reports from across New York State of swastikas and other hateful symbols targeting synagogues and other houses of worship and community buildings," stated New York Regional Director Evan Bernstein. "ADL is monitoring this disturbing trend and will continue to speak out when necessary."

“Every individual has the right to express themselves, even with imagery that is hateful and offensive," Bernstein added. "Hate speech is still free speech. Having said that, it is shocking to see someone wearing a swastika, the symbol of Nazi Germany and the Holocaust. We continue to use our right to denounce hateful symbols; hate has no place in New York. The best answer to hate speech is more speech."

The MTA and Mayor's Office did not immediately respond to a request for comment.

This story has been updated with a statement from the ADL.

#MTA
#nazi
#subway
#swastika
#original
Do you know the scoop? Comment below or Send us a Tip