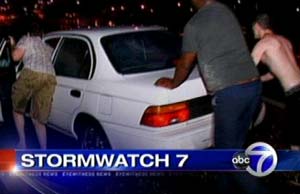 What a week of weather! There was the heat wave at the beginning, and yesterday a huge thunderstorm barreled into the area. Almost two inches of rain fell in Central Park; National Weather Service meteorologist John Cristantello explained to WABC 7 it was a "very slow-moving storms, so (the rain) is having time to accumulate." No kidding!

The F line was partly shut down in Queens, highways were flooded, and trees were downed. Outdoor concert goers were hit, whether in Central Park or at Jones Beach, where the REM, Modest Mouse and the National were performing and lightning actually struck the amphitheater. Even a fire truck was stuck in a sinkhole.

A Forest Hills residents told WCBS 2, "Amazing wall of wind, hail and rain - it just came by. We ran around closing windows. People were panicking; it was just unbelievable. Never saw anything like it. We looked outside there were trees falling all over."

#storms
#summer 2008
#weather
Do you know the scoop? Comment below or Send us a Tip