by Fred Mogul and WNYC Staff

What will consumers do to save a nickel or two?

To find out, Suffolk County and the Nassau County town of Long Beach have been conducting a behavioral experiment that intertwines politics and economics.

Both jurisdictions imposed a 5-cent tax on plastic and paper bags in recent years, and both saw big drops in the disposable bags and big increases in reusable bags.

“At the beginning, 50 percent of the customers were pissed off, and the other 50 percent were happy,” said Chelo Urena, who manages a Key Foods supermarket in Long Beach. “Now, we’re probably 90-to-10 [happy], which is mind-boggling to me.”

Going into the Earth Day kick-off of the local ordinance in 2017, Urena’s store aggressively doled out reusable cloth bags to churches, PTAs, soup kitchens and other local institutions. Now, cashiers give grocery shoppers fewer than 2,000 free plastic bags a week, a fraction the 10- to 15,000 they doled out before the fee.

“I was very iffy on the whole thing,” he said. “I don’t like taxes. They take money people can use to buy things. But now I feel it's great for the environment and for the children.”

In Suffolk County, where a 5-cent tax on paper and plastic bags took effect at the beginning of 2018, a study found a roughly 80-percent decrease in usage for both kinds of bags, and a 42-percent drop in plastic bag pollution.

Now the experiment moves to the rest of the state, but with a twist: New York will soon follow in California’s footsteps and banish plastic bags altogether, while taking a different path on paper bags, which are also bad for the environment. The Golden State imposed a state-wide 10-cent fee on those, but the Empire State is giving counties and municipalities the option of charging consumers 5 cents for each paper shopping bag.

Albany was poised to blanket the state with that tax, and let local areas opt out. But late in last month’s budget talks, Governor Andrew Cuomo ripped the mandatory paper bag tax to shreds.

“My understanding is he was pretty adamant about not having a state-wide fee on paper,” said Judith Enck, who negotiated environmental legislation for previous Democratic governors and led the EPA regional office under President Obama. 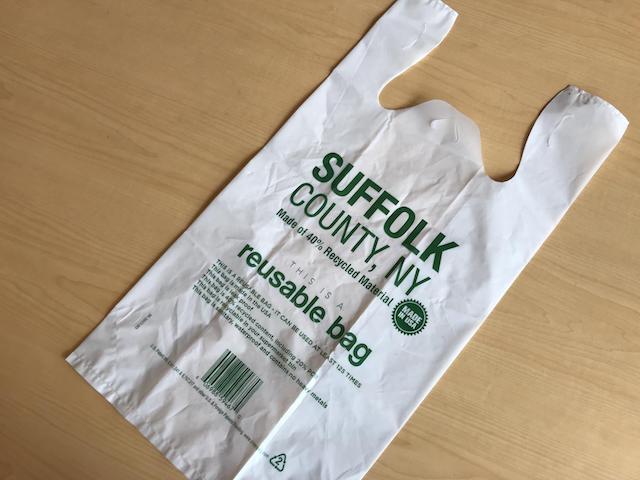 Suffolk County giveaway bag, is intended for the body of the story. (WNYC)

Enck and other sources told WNYC that Cuomo had an ally in Assembly Speaker Carl Heastie, who was also ambivalent about taxing paper bags. With the 2020 budget introducing a new internet sales tax, a high-end real estate transfer tax, and the elaborate and expensive series of Manhattan tolls known as congestion pricing, the two men apparently were wary of imposing yet another fee on New Yorkers.

“It’s really too bad, but I also think that once the plastic bag ban takes effect, it’ll be a learning moment for New York consumers,” said Enck, who now teaches at Bennington College and is leading a national crusade against single-use plastics.

The plastic bag ban goes into effect next March, and local elected officials across New York have started staking out positions on the paper bag tax. The New York City Council has passed a bill instating one, and Mayor Bill de Blasio has said he’ll sign it. But in Nassau County—home to Long Beach—Republican legislators say the measure is “dead on arrival.”

“As long as the Republicans have the majority in Nassau County, there will be no paper bag tax," said Richard Nicolello, the county legislature’s presiding officer.

Environmental groups are pledging a grass-roots campaign to encourage consumers to get reusable bags—and politicians to impose the ‘nickel nudge’ to incentivize the shift. Julie Tighe, president of the New York League of Conservation Voters, thinks that the state might initially be a patchwork quilt of places with and without the fee. But she predicts many will opt in, even relatively conservative suburban and rural ones.

“I actually think in some of those other places it'll be easier, because people are more dependent on cars, and they can just keep bags in their cars for when they're out shopping,” Tighe said.

She also envisioned alliances with hunting and fishing groups.

At Long Island’s Gala chain of supermarkets, it might not matter what the local politicians decide about fees. Whether a store is in Nassau or Suffolk county, managers will be pushing reusables and staying away from paper.

“There’s a reason why the grocery industry moved away from paper bags years ago,” said Jenny Jorge, the Vice-President of Operations at the Gala in Freeport. “They’re expensive. They attract vermin. And you’re killing trees, so what's the point of that?”

“It just opens up a whole new problem,” Jorge said. “Our cashiers are anywhere from a 16-year-old high school kid to an older-age retired person, and if they make any type of mistake counting bags, we're going to get fined for it.”

Only a revolt from customers could get her to offer customers paper bags, Jorge said. But she isn’t worried.

Her family’s stores in Suffolk County have seen dramatic uptake in reusable bags, thanks to giveaways and public events, giving her hope that the strategy will succeed in Nassau County, too — fee or no fee.

“We give them out at customer appreciation days, health screenings, you name it,” she said. “And now we’re going to amp that up.”