Stop And Frisk Up Last Year, But Formal Complaints Down (Again)

NYCLU Associate Legal Director Christopher Dunn says the CCRB is to blame. "In light of the increasing anger over abusive stop-and-frisk tactics in many communities, the drop in stop-and-frisk complaints filed with the CCRB last year suggests that the public is simply losing confidence in the agency," Dunn speculates, referring to the CCRB. "This would be no surprise since the CCRB has been silent as stop-and-frisk abuse has become a huge public controversy." 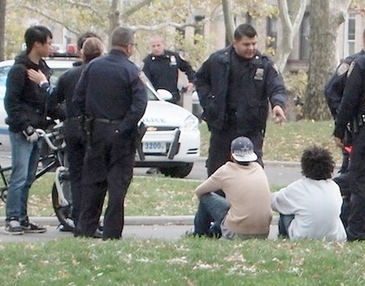 Indeed, this year NYPD's reported stop and frisks sharply declined in the spring—34 percent—which several NYPD sources at least partly attribute to the widespread public condemnation of stop-and-frisk. Officially, the NYPD claims there were fewer stop and frisks in the spring because of a decline in the number of rookie officers assigned to Operation Impact, which places new cops in high-crime neighborhoods to focus on detecting suspicious behavior.

“Young police officers don’t have the experience to judge in advance,” Bloomberg told reporters recently when asked about the connection between stop and frisk and Operation Impact. “So you would expect them to be a little more aggressive, because they don’t know whether that person is a danger to you and your life, and you want them to err on that side.” And when another reporter asked if stop and frisks would continue to decrease, Bloomberg said, "We’re not going to walk away from what we think is one of the most important methods to keep you and your family safe, no matter what you write about."

The Times, in particular, has been writing about it often, much to the Mayor Bloomberg and Commissioner Kelly's chagrin. Today's excellent installment in the paper's stop and frisk series examines how stop and frisk impacts women, especially in light of the fact that 80% of the city's police force are men. In interview after interview with the Times, women talk about the humiliation and sexual intimidation that go along with stop and frisk.

One woman, for example, was sitting on a Harlem bench with friends in the early evening when she was approached by officers who said they were looking for a rapist. “They tapped around the waistline of my jeans,” she tells the Times. “They tapped the back pockets of my jeans, around my buttock. It was kind of disrespectful and degrading. It was uncalled-for. It made no sense. How are you going to stop three females when you are supposedly looking for a male rapist?”

#CCRB
#nypd
#statistics
#stop and frisk
Do you know the scoop? Comment below or Send us a Tip