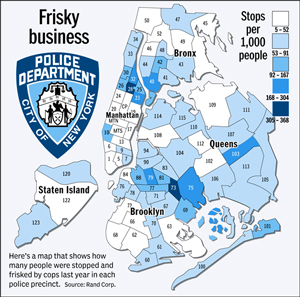 A study of data concerning NYPD stop and frisk practices was released by the Rand Corporation last Tuesday. Reactions to the report were so varied that it's difficult to say if Rand came to any conclusive findings whatsoever. The New York Times lede indicates that police are biased against blacks and Hispanics. "Whites and members of minorities have a roughly equal chance of being stopped by police officers and questioned on the street in New York City. But officers are more likely to frisk, search, arrest or give summonses to black or Hispanic people — or to use force against them — according to a study released yesterday."

Newsday writes that the study indicates that accusations of racial bias in stop-and-frisk incidents have been widely overplayed and that any small disparity in the practice can be explained by the circumstances under which the incident took place. The Daily News was in agreement, saying that the Rand study dispelled allegations of racial profiling by the NYPD. Both papers noted that a large number of disparities could be traced back to just a handful of officers according to the story, and that the most persistent trend of racial bias occurred on Staten Island.

Not everyone was as sanguine about the report's findings. The executive chairman of the National Latino Officers Association of America said that the report was filled with excuses and statistical justifications for poor behavior. The organization pointed out that blacks were stopped and frisked at twice their rate of occurrence in the population. The Rand study countered this argument by saying that different races were stopped in proportion to the race of described suspects in any given crime. The Center for Constitutional Rights also challenged the Rand report, pointing out that of the more than a half-million people stopped and frisked in 2006, 89% were non-white and 90% were never charged with a crime.

Unsurprisingly, Mayor Giuliani's stalwart support of cops and his employment of an aggressive policing style gained him the reputation of being "a real hard-ass." Mayor Bloomberg, on the other hand, comes off as a fairly congenial guy. The New York Post has an interesting article with graph in it that shows that complaints against the NYPD to the Civilian Complaint Review Board have been showing a rapid increase during the current Mayor's tenure. Stop and frisks are actually down this year versus a year ago. The information was comparable on a year-over-year basis for the first time in 2007, after repeated requests for its release by the City Council.