Stock Market Rebounds, Waits For Arbitrary Signal To Freak Out Or Relax

After the worst day for the Dow Jones since December 2008, the index was up 1.83 percent this morning, and the Nasdaq climbed up 2.85 percent, stemming some of the damage done in yesterday's 634-point freefall. $8.1 trillion has been lost from global markets since July 24, in what the Times calls an "epidemic" fear among investors. Treasury bonds did quite well, despite the S&P's credit downgrade, so why do we care about what the S&P thinks anyway? Oh, right, the market's run by lemmings. "When you get declines of this sort, it is technical factors and emotion that drive markets—fundamentals are largely irrelevant," one expert says. 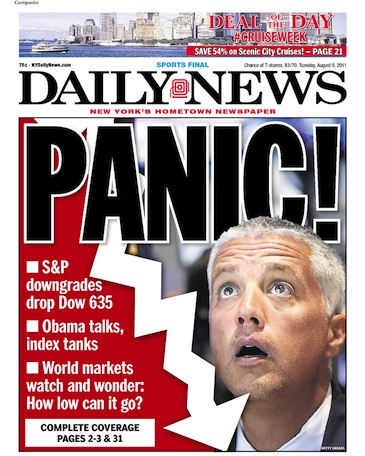 Meanwhile, Americans continue to nag their great aunts for that family bracelet they were supposed to give them at Thanksgiving: gold shot up to $1,752 an ounce. Over at the website of Glenn Beck-affiliated drunken prospector precious metal-peddler Goldline, they quote a Chinese investor who believe the US dollar is "destined to be 'gradually discarded by the world' and that the 'process will be irreversible.'" B-b-but, Glenn said not to trust the evil Chinese. After all, they want to "rape our mountains for coal" and makes us all their little "worker bees." We're confused! Better make a bunch of signs with spelling errors and march on D.C.

Former Treasury Secretary Hank Paulson Jr., who presided over a similar downturn in 2008, believes that "the most pressing and significant problems in the global economy are unsustainable structural issues with regard to the E.U.," as banks in Greece, Spain, and Italy may not be able to cover their current debt to wealthier E.U. nations. Most tellingly, Paulson implies in comments to the Times that the commission set up by the debt-ceiling compromise should raise revenue through higher taxes on the wealthy: "we can't just cut our way out of the problem," he says.

Markets are expected to remain "volatile" until the Federal Reserve makes its "monetary policy statement" at 2:15 p.m., which is expected to provide the markets with some warm milk, a binky, and a few readings of Goodnight Moon.