Christmas is a couple days away, but it seems that former governor Eliot Spitzer has given the tabloids an early present: The Love Gov been dating his ex-spokeswoman Lis Smith who worked on his failed comptroller campaign—and she now happens to be spokeswoman for Mayor-elect de Blasio's transition. 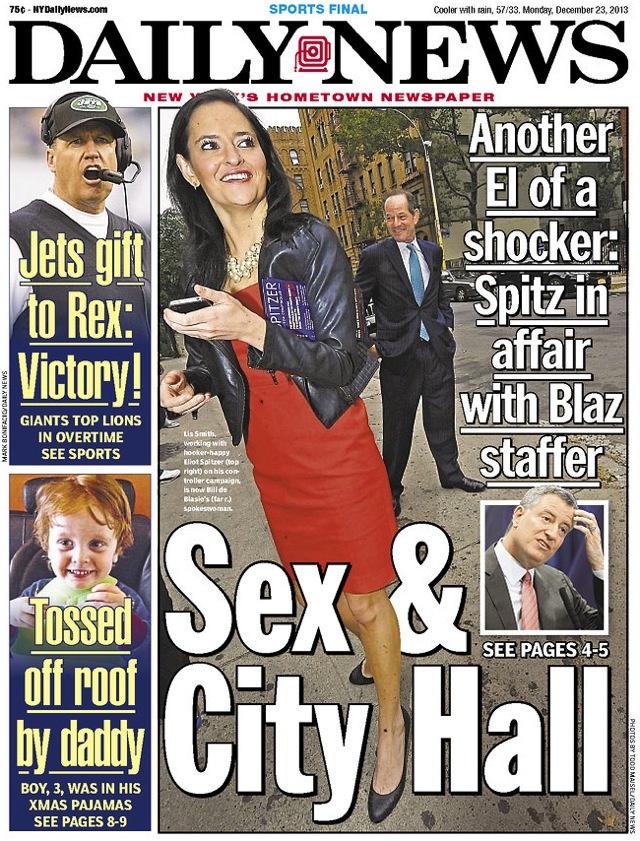 The Daily News broke the news last night, reporting, "Two people with knowledge of the situation confirmed her romantic involvement with the ex-Love Gov, painted by hookers as a law-and-order hypocrite who left his knee-high black socks on in the sack... It was unclear when exactly the relationship between the 54-year-old politician and the leggy, sharply dressed PR pro began." Smith is 31.

Spitzer is still married to his wife Silda Wall Spitzer, but she apparently moved out of their Fifth Avenue apartment months ago. Still, a source said, "It’s shocking to me. I had no indication, no idea. Wow. I can’t believe that. That is unbelievable."

The Post then published their story, complete with multiple photographs of Spitzer and Smith in SoHo. Of course, for the Post, this is a way to pout over the election of a progressive: "In an embarrassment to de Blasio on the eve of his Jan. 1 inauguration, his flack was caught twice spending the night with the tainted, 54-year-old Spitzer at her Thompson Street apartment building last week."

On Wednesday, Spitzer pulled up in a cab a couple doors down from Smith’s five-story walkup at around 10 p.m., wearing jeans, sneakers, a white hoodie and a grin as he walked to the building and rang the bell.

He was buzzed in — and didn’t emerge until 5:45 a.m. With bags under his eyes, he stopped briefly on Smith’s stoop to look at a newspaper that had been delivered before bolting through the predawn darkness to catch a cab near Prince Street.

Smith, a tall, dark-haired beauty, emerged a little after 10 a.m. smiling and looking fresh in a hot-pink coat. On Thursday night, Spitzer showed up again, looking dapper in a long black overcoat and dress shoes as he walked to her door from Prince Street at around 10 p.m. He went in and emerged an hour later with Smith, both of them darting about 20 feet into Le Pescadeux restaurant on the ground floor of her building.

Tomorrow, the Post will probably have details from their weekend activities! For now, let's enjoy this quote from the manager of Le Pescadeux, "The first time I saw Spitzer, I didn’t know if he was Eliot Spitzer or Anthony Weiner. Those two are like the same exact guy." And chortle over Spitzer's "sweatshirt disguise."

Spitzer's spokeswoman Lisa Linden said, "Lis Smith is a friend of Eliot’s, and he holds her in high regard."