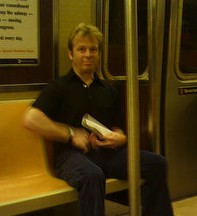 On Wednesday the City Council passed a law that we're calling "The Dan Hoyt Law". It will "target individuals who commit lewd acts in public more than once in a three year period," which will allow judges to give flashers a harsher sentence, up to a year in jail and three years of probation, on top of a $1,000 fine.

"We are moving to punish a pattern of behavior that is not only disgusting but dangerous. Those who repeatedly expose themselves to others for their own amusement could one day take their perversion even further," the bill's sponsor, City Council member Peter Vallone, said yesterday. "If they want to expose themselves we'll expose them to the full extent of the law."

Two years ago a cameraphone picture of raw food guru and "subway pleasurer", Dan Hoyt (pictured), started a media frenzy and helped in his arrest -- though he only received two years probation.

As of this year 911 and 311 are equipped to receive picture messages, but is it helping? Metro reports that "a 28-year-old NYU student boarded a 'very crowded' Manhattan-bound E train last week at 23 Street/Ely Avenue when she felt 'a rather strange sensation' in her 'nether regions.'" The woman said, “Someone was grabbing a hold of my crotch and holding on for dear life." After taking a cameraphone picture of the perv, she went to the police and was told she should have informed the conductor or the transit police instead. After a call to the transit police was not returned, she wrote to the Mayor's office. What good is the new law if the NYPD won't help track the guy down? If you get harassed and find yourself in the same situation -- head to Holla Back NYC and post your photo and story.

#As
#city
#City Council
#Dan Hoyt
#Holla Back NYC
#law
#manhattan
#mayor
#metro
#nyc
#nypd
#NYU
#On Wednesday
#peter vallone
#subway
#The Police
#Wednesday
Do you know the scoop? Comment below or Send us a Tip