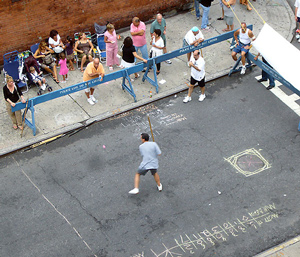 The New York Times has an interesting and somewhat melancholy article on the decline of street sports played by New York's children. Whereas there was once a time when adults had to bypass certain blocks while walking in their neighborhood, so as to not interrupt multiple games in play, a number of factors have contributed to the downfall of pastimes like stickball. Larger and less crowded apartments, both parents working, video games, air conditioning, fear of crime, a focus on structuring children's free time to advance them socially and academically, less cohesive neighborhoods, and more traffic are all suggested as possible reasons for a drop in most parents' shared summer vacation plea: "Why don't you go out and play?"

The old games aren't completely gone. The Times reports that some still kids play variations on stick ball, curb ball, booty's up, manhunt, skelly, and other street games, but the executive director of a nonprofit group called Street Lore that studies the nation's cultural heritage fears much is being lost as fewer kids engage in self-structured playtime.

“Parents drive children at a very young age to get them on the right track for success, so every waking moment is programmed, which doesn’t leave lots of time for play,” said Steven Zeitlin, executive director of City Lore, a nonprofit group on the Lower East Side of Manhattan that studies the nation’s cultural heritage. “A lot is being lost as these old forms of play die out.”

Many older people are attempting to keep the idea of street play alive, with adult stickball leagues. Anthony Gigante, upon hearing that many Bensonhurst kids couldn't afford the fees of organized baseball leagues, got the city to close a neighborhood street to traffic every Sunday morning for three hours. About 40 kids show up every weekend to play in Gigante's stickball games.

Boerum Hill resident Delores Hadden Smith is nearing 60 years of age, but is clearly still young at heart. She organized an evening last year for adults to teach neighborhood children games with saccharine-sounding names at Gowanus House. Many were skeptical that today's already worldly kids would go for such benign-sounding pursuits in this day and age. The event was a rousing success, however, with more than 300 registrants and games that continued past midnight.

“The children were children like when we were children,” she said. “They weren’t little fidgety adults or little thugs or thugettes. Every single weekend since then, I can’t go out to the corner store without them coming up to me saying, ‘I’m ready! I’m ready! When are we going to do that again?’ ”

She's planning a similar event for this summer and expects an increased turnout. It's an interesting article by the Times and we recommend it, if you're not already outside playing in the street.