Earlier today, we had the privilege of meeting Steve Novak at an appearance to announce McDonald's new Premium McWrap at their location on Sixth Avenue and Fourteenth Street in Manhattan. Novak wasn't quite as precise making the wrap as he is from three point range (he committed a classic "overstuff" violation) but he did bring his sense of humor: he offered to "bust a flow" during the rap battle portion of the appearance and described the McWrap as "healthy" on numerous occasions (although to be fair he opted for the grilled chicken and skipped the bacon—pay attention kids!). 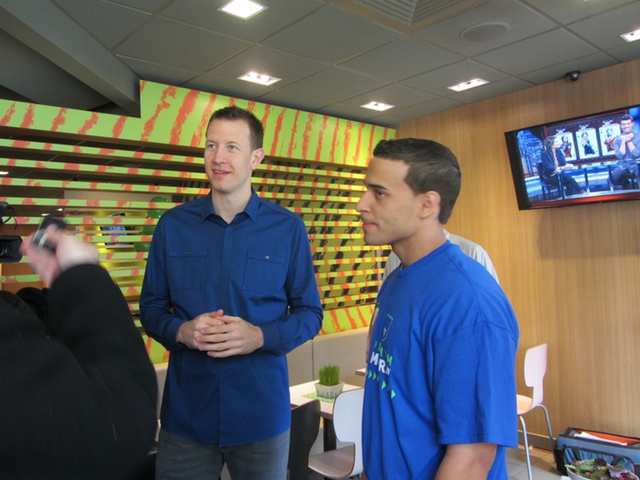 Novak, who arrived fifteen minutes early with an entourage of precisely one (almost certainly his brother), was as gracious as you'd expect a young man from Wisconsin to be. He was also generous with his time. Here's what Novak told us:

On missing this shot last night:

Ooooh man, it was the first thing I said to Jason [Kidd] in the locker room. You know, he drove baseline and I said "Jason!" and he didn't pass it, and I said "Jason!" again, one more time, and at that point he was already through the lane and then he still threw it, without looking, behind his back. I caught it basically out of bounds but I knew, there's no way I got passed that pass and wasn't going to shoot it.

When I let it go I thought it was good, it didn't go down and I had to tell J after the game. 'I'm so sorry I missed that one for you.' I would have loved to see it go in but you know, to be honest, it doesn't take anything away from the pass. That's who Jason is, he makes the pass even when sometimes it's hard to see ahead of time. He makes it, he anticipates it and it was an unbelievable pass.

On whether he's introduced JR Smith to his parents:

I'm not sure I have. My parents are in Milwaukee, so maybe they've met him. You know, JR gets this rap, and maybe appropriately so sometimes, but we get to see all the sides of JR. He's not just one thing, he's not just a party boy, he's not just crazy. He's also one of the nicest dudes I know, extremely well spoken, he's a smart player, he's one of the guys in the NBA who can do just about everything. He can guard four-men, he can shoot from the perimeter, he can get to the rack, he can get guys the ball.

So he's somebody who just, I think, everybody enjoys being on the court with. I do especially because of the way he finds guys and creates problems for the defense.

On the belief that he can't get his shot off in the playoffs or against certain teams:

No, it's not accurate. I know my role and obviously last year in the playoffs there were things said like that but the truth is I wasn't going to go outside of what I do and force things. It's a team game and that wasn't what it was about.

Obviously if defenses are going to take certain things away, we want to take advantage of other things. There's no question that I continue every offseason to work on creating my shot and that kind of thing but there'll always be a knock in one form or another. We'll just continue to work and understand that it's a team game.

Novak seemed to genuinely enjoy making the snack wrap (this reporter, who opted for both the fried chicken and the bacon, certainly enjoyed eating it). The Premium McWrap is available now at your local McDonald's.

You can follow Jonathan Fishner on Twitter @therealkingfish, and check out his blog The Real King Fish.

#basketball
#Jason Kidd
#jr smith
#knicks
#mcdonald's
#sports
#steve novak
#original
Do you know the scoop? Comment below or Send us a Tip