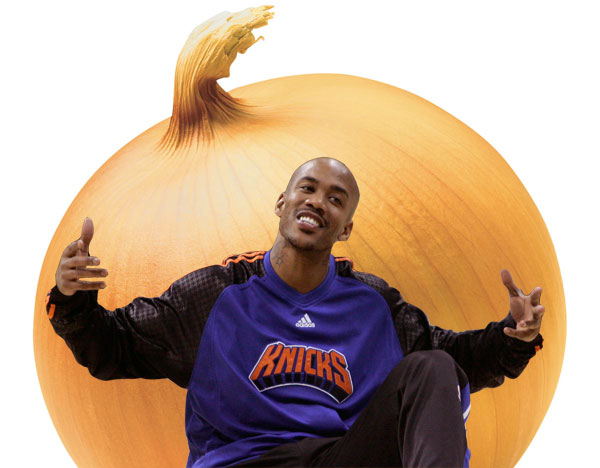 NYC & Co better update their marketing materials, because New York City has a new name...The Big Onion. At least that's what Stephon Marbury is calling New York these days. While professing his love of yesterday's NY Post cover (we can't argue with him), Marbury e-mailed The Post, "I must say the front page of The Post has to be the funniest thing I have ever seen in a long time. I'm sitting on the plane laughing. You have to love New York. The big onion will either make you laugh or make you cry." Uh huh. Maybe his giant basketball-player-sized fingers couldn't type correctly on his phone. Nevermind that typing o-n-i-o-n is nowhere near a-p-p-l-e. One thing's for sure, Marbury has as many layers as an onion.

While in town on his 1-day absence from the Knicks, Marbury paid his respects to the family of his former coach Robert Williams, after learning that he passed away Tuesday. Williams, known as Mr. Lou, was a mentor and coach to countless kids, including Marbury and Sebastian Telfair in Coney Island who played basketball on the court near his apartment building in Surfside Gardens. One former player said that Mr. Lou was "the backbone of this whole community." Marbury was able to view Williams' body, where he was, by one account, "crying like a baby." A memorial service for Williams will be held tomorrow in Coney Island.